Pronto: All Is Golden 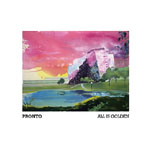 There's a new game in the music world: Six degrees of Wilco. Current Wilco keyboardist Mikael Jorgensen's band Pronto is the latest degree in a wide network of Wilco connections. All Is Golden is Pronto's debut and Jorgensen composed and sings all the material. The musical influences are varied: power pop; retro '70s funk; Chicago Transit Authority pop/jazz horns; and songwriter Americana like The Band or Randy Newman. The dilemma of deciding whether to be a jack of all trades or master of none comes to mind, though it all out works well, with plenty of catchy hooks and memorable phrases, despite it feeling like there's still a decision to be made.

The best aspects of All Is Golden come through Jorgensen's occasionally exceptional lyrics. Perceptively droll observations and quirky associations win over his more concrete writing. The record's best song, "What Do You Know About You?," opens: "What do you know about you?/Is it the color of your hair/Or the size of your shoe?/What do you think about you?/Are you handsome or ugly /Like a fox or kangaroo?" With its Dr. Seuss word play, simple pop harmony/rhythms, and near nursery rhyme-like melody, the tune starts off sounding like something from Sesame Street: picture a jolly adult singing to a wondering child with pictures of kangaroos, shoes, and question marks swirling above his head.

But "What Do You Know About You?" soon turns ironic, somewhat dark, and a bit surreal: "Are you a fireman/Who is working in women's shoes?/Are you a fisherman/Who would rather be making shampoo?" It ends up like a tune meant for Jon Brion's soundtrack to the 2004 film, I Heart Huckabees—a musical companion to the film's mantra, "How am I not myself?" The childlike playfulness and humor of the tune veil its more serious social commentary. It's a heady mix— Schoolhouse Rock (1973) for adults. And clocking in at barely two minutes, it seems that it may have been a throwaway that was thankfully included.

There are tunes that go for a grittier, rock and roll vibe such as "Listen Lover," "Monster," "Unexpected Vex," and "I Think So." One of the record's better tracks, "Precious Like A Sneer," while lighter sonically, still has lyrics with some teeth: "Panic over boredom/It's the white man's disease/Finalize the patterns/Overfill prescriptions please." While these words are thoughtful and clever, they also leave the impression that Tyler Durden may be around the corner waiting to ask the lyricist, "How's that working out for you?" Generally, the tunes that are going for more edge could use a little more "Sneer" and a little less "Precious."

Straightforward, folk/roots acoustic-based nostalgia like "Good Friends Have Gone" and "Had & Have" are well-crafted and well-performed. The one true oddity of All Is Golden is "Mrs. Bruford." With its aborted psychedelic intro giving way to a three minute pop instrumental, it sounds like something salvaged from Paul McCartney's cutting room floor. The tune gets points for sheer strangeness. Warts and all All Is Golden is a promising debut.

Listen Lover; All Is Golden; Good Friends have Gone; When I'm On The Rocks; Precious Like A Sneer; Monster; What Do You Know About You?; Big Sleeved man; Unexpected vex; Say It All Night; Mrs. Bruford; Had & Have; I Think So.