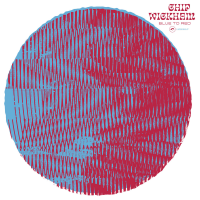 The marketing thrust accompanying Chip Wickham's third album emphasises an affinity between the disc and the late 1960s / early 1970s work of Yusef Lateef and Alice Coltrane. Certainly, Blue To Red ticks two boxes: Wickham puts aside his saxophone to play only flute and alto flute, whose seraphic tones were favoured by Lateef and Coltrane; and there are plenty of Coltrane-like harp glisses, played by Amanda Whiting, like Wickham a graduate of Manchester-based spiritual-jazz trumpeter Matthew Halsall's Gondwana Orchestra.

So there is a spiritual-jazz connection. But it is less pronounced than on Wickham's previous outing, Shamal Wind (Lovemonk, 2018). The greatest resonance on the new disc is with the late-1960s film music of Lalo Schifrin, channelled through soundtracks such as the one for Bullitt (1968). Partly it is Wickham's frequently urgent, vocalised flute. Partly it is the layered work of keyboard player Dan Goldman, who is heard on Fender Rhodes and Korg Minilogue. Partly it is the crisp, in-the-pocket drumming of Jon Scott, whose several manifestations include touring as a member of London reed player Shabaka Hutchings' Sons of Kemet. Partly it is because improvisation is of less concern than mood and texture.

Blue To Red is, in fact, both spiritual jazz and old school soundtrack-jazz, the latter realised with keyboard and production technologies many times more sophisticated than was available to Schifrin back in the day. The more blissed-out tracks ("Blue To Red," "The Cosmos," "Mighty Yusef") veer towards the spiritual-jazz end of the spectrum, the edgier tracks ("Route One," "Interstellar," "Double Cross") towards Schifrin. Indeed, there are moments, particularly in "Interstellar," when you might imagine you are watching the climactic car-chase scene in Bullitt, in which Steve McQueen chases down the baddies. But it all hangs together nicely and manages to sound both modern and pleasantly retro.

Like all Wickham's work, Blue To Red is undemanding but soothing (and we can always use some of that)—the latter quality despite the fact that the concept for the album was, apparently, environmental catastrophe and Earth's flight from being blue towards a desolate Mars-like red.