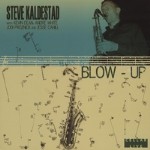 The continued ignoring of Canadian musicians in "Jazz Central, South of the Border" ought to have been a thing of the past a long time ago. Thankfully Canadian record labels such as Montreal-based Justin Time and Effendi Records, Toronto-based Alma Records, and now Vancouver's wonderful Cellar Live are hopefully fast-changing that. Blow-Up, from saxophonist Steve Kaldestad, recorded live at the Cellar Night Club and released on the club's label, is another exemplary testament to the jazz idiom from a quintet of among Canada's finest.

Kaldestad has a virtually vibrato-less, yet poignant—almost emotional—tenor sound, and is a natural leader who opens up songs to their individual harmonic journeys for the musicians he surrounds himself with. Because of his wonderful sense of music beyond melody, he also composes with a palette of shades and textures that proves inviting for brass, keyboards bass and drums, but especially for the trumpet. In this case the beneficiary is his one-time professor from McGill University, Montreal. Kevin Dean is a fine trumpeter who has adorned countless records and who plays solo after bejeweled solo on these four Kaldestad compositions.

On "Shimmy," a fine, puckish song based on the changes of Fats Waller's "Jitterbug Waltz," Dean's solo comes alive like a cinderblock at flashpoint, handily provoked by Kaldestad's saxophone. On "In Lieu of You," a song more obliquely rooted in the changes of the Arthur Schwartz/Howard Dietz standard "Alone Together," the two musicians flutter in each other's tail wind: Kaldestad quotes from several standards, turning the melody inside out while Dean returns the favor unmasking the song's mystery and righting it up once again. "Siesta" and "Stanley" find the musicians stretching beyond even the elasticity of the songs' lengthy melodic licenses.

Any suggestion that the saxophonist and trumpeter hog the spotlight is regretted. Pianist André White plays a stellar role under the surface of the opening three tracks and then bursts forth in all its majesty on Billy Strayhorn's "A Flower is a Lovesome Thing." White sets the tone for this romance between five instruments, leading the saxophonist and trumpeter into a meditative realm. Bassist, Jodi Proznick, is beautifully melodic while drummer Jesse Cahill is suitably restrained throughout the set.

André White contributes the fiery "In The Loop," and Dean's "So Long Cerulean" is an enthralling blues that ignites this night of perfect playing on the part of these five fine Canadian musicians. Maybe this can lead to an acknowledgement or at least emphasize the importance of other Canadian musicians like Don Thompson, presence in bands led by John Handy and George Shearing as well as Jane Bunnett, for contributions that go quite beyond the music.

Shimmy!; In The Loop; In Lieu of You; A Flower is a Lovesome Thing; Siesta: So Long Cerulean; Stanley.