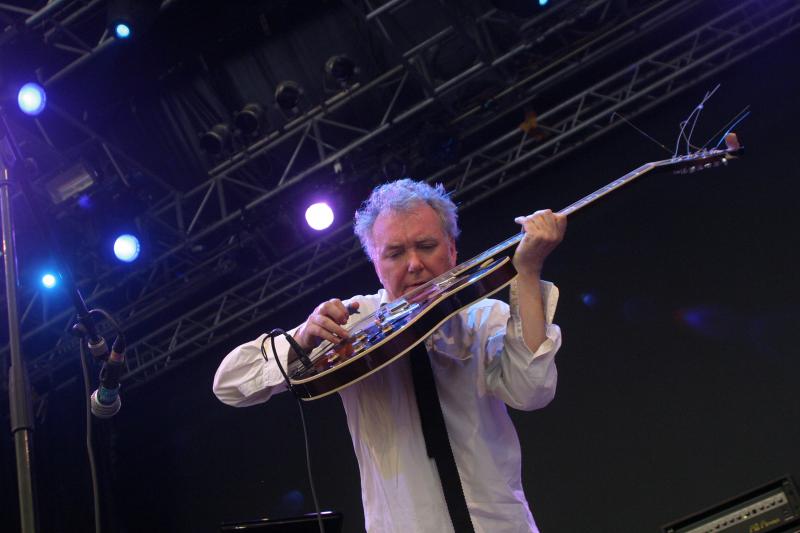 By Roger Farbey
May 16, 2016
Sign in to view read count
On 5 July 2016 guitarist, composer, vocalist and philosopher Billy Jenkins hits the Big Six-O. It only seems five minutes ago that Jenkins played at the Purcell Room during 2010's London Jazz Festival, accompanied by the BBC Big Band to a suitably enraptured audience. He's been gigging and recording less in the past five years. His album Jazz Gives Me The Blues (VOTP VOCD 1167) was released in 2011 and Billy became an Accredited Humanist Celebrant approved by the British Humanist Association (BHA) to conduct non-religious funerals in 2008. More recently he's released two digital download-only solo guitar albums The Semi-Detached Suburban Home (Music For Low Strung Guitar) (2014, VOTP VOCDD117) and Death, Ritual & Resonation—Eight Solo Studies On Low Strung Guitar (2014, VOTP VOCDD117), both to critical acclaim.

Whilst latterly Jenkins' musical muse has been The Blues, he was always something of an all-round guitarist. He started playing in the art rock band Burlesque, which also featured his erstwhile duo partner, saxophonist Ian Trimmer with whom he subsequently formed Trimmer and Jenkins. With Trimmer he also accompanied legendary Cream drummer Ginger Baker for a relatively short period in the band Ginger Baker's Nutters. But his jazz career really started from his earliest album, the tongue-in-cheek titled Sounds Like Bromley (1982, Plymouth Sounds LBB1) reflecting the stultifying artistic sterility of his suburban home town). Released in 1982, it revealed musical influences as diverse as Tamla Motown, Two Tone and Charles Mingus. His next album, Greenwich (1985, Wood Wharf Records—WWR 852) again reflected the culturally moribund South London into which he was born. Arguably it was he and fellow musician Django Bates, also from the suburbs of South London who put jazz on the map in the area. Admittedly the late David Bowie, also from the Beckenham /Bromley area had made a significant contribution to rock and indie music, but it was the likes of Jenkins and Bates who woke London up to a new contemporary jazz in Britain in the 1980s.

Greenwich was a more jazz orientated album but retained Jenkins' unique hallmark of humour and jazz married with highly inventive compositions, imaginative arrangements and instrumentation. Whilst Django Bates' Loose Tubes was firing-up around 1984, there was significant personnel interaction between that anarchic big band and Jenkins' own recordings and performances. Loose Tubes alumni Ian Ballamy and Steve Berry played on Greenwich, the first of frequent associations with various members of Loose Tubes (including Bates) that continued for many years.

Uncommerciality Volume 1 (the "Chocolate Box" series, so-called because their respective covers pastiched well-known brands of British chocolate) was recorded in 1986 and marked the beginning of a more profound appreciation of Jenkins as a master of complex jazz composition. Richard Williams in The Times described this as 'an impressive example of a man in absolute command of his materials. Vibrant in a way that often recalls the spirit of the late Charles Mingus, Uncommerciality is an accomplished and sometimes provocative piece of work.' Uncommerciality Volume 2 was recorded in 1988 and Uncommerciality Volume 3 in 1991. Boasting a stellar array of British jazz musicians including Loose Tubes members Iain Ballamy, Steve Berry, Chris Batchelor, Django Bates, Martin France, John Eacott, Mark Lockheart, Huw Warren, Stuart Hall, Thebe Lipere and Ashley Slater, this three album set was surely the apotheosis of Jenkins' career. Also in The Times, John Bungey described it as: 'Three sprawling, inspired sets -a landmark in warped jazz pleasure.' and reviewing the 2010 download-only reissue of Uncommerciality (VOTP VOCAD108/VOCAD109/VOCAD110), John Fordham wrote in the Guardian of 8 July: 'All in all it is not only Jenkins's finest hour, but a landmark in contemporary UK jazz.' Thankfully, it's still available as a digital download and highly recommended.

Another important element to Jenkins' works is the concept of Spaß or Spass which is the German word meaning fun or joke. Hence his album Scratches Of Spain, the title and album cover art being pastiches of Miles Davis's Sketches Of Spain (1987, Thin Sliced Records—SLICE 13, reissued on CD in 1994, Babel BDV 9404), in which he is credited playing Spaß guitar. Whilst inherent fatuousness runs throughout Scratches Of Spain it's not a joke album. The personnel constitute a virtual Loose Tubes line-up with many of the participating musicians drawn from that ensemble. "Barcelona" for example epitomises the musical Spaß, with the opening passages of clarinet and snare drum exactly parodying Miles' Sketches Of Spain, specifically "Saeta," following which a gear-shift crunch mood change sees Jenkins' guitar incongruously bursting into full Hank Marvin mode. There are further diversions on the album which veer wildly from comical The Mothers of Invention or Bonzo Dog Band emulation to the elegantly lugubrious 'cello-led piece, incongruously titled "Cooking Oil."

Humour pervades Jenkins' works, whether it is in the gently mocking album and song titles, the cover artwork or the lyrics ("Jazz Had A Baby And They Called It Avant-Garde"), there is clearly a similarity in approach between Jenkins and Frank Zappa, though their respective music is entirely different. Both demonstrate an exceptional musical ability in multi-faceted genres and a keen love of wordplay and parody.

A real revelation as to the comprehensiveness of Jenkins' guitar technique can be heard on his solo acoustic album In The Nude (1987, West Wind—WW 010) where he plays a range of jazz standards and some blues, at times redolent of the doyen of acoustic jazz blues guitar, Davy Graham, but imbued throughout by Jenkins' inimitable sense of humour. It's sadly now out of print but with some second hand copies still floating about.

Entertainment USA (1994, Babel BDV 9401) included tracks with teasingly provocative titles such as Ronald Reagan and Charles Manson but consisted of thoughtfully-composed instrumental parodies (of sorts); there was even a separate book of poems on the same theme with the same title. Mayfest '94 (1995, Babel BDV 9501) was recorded with the Fun Horns of Berlin, as was East And West Now Wear The Same Vest (1996, Babel BDV 9601) which again were imbued with Jenkins' trademark spoofs such as his memorable take on The Carpenters' "(Not) Close To You," Lee Marvin's "Wanderin' Star" and Satchmo's top ten hit "What A Wonderful World."

These were followed by Still Sounds Like Bromley (1997, Babel BDV 9717) and True Love Collection (1998, Babel BDV 9821). Throughout his solo career Jenkins "backing group" of superbly talented musicians -frequently populated by members of the Loose Tubes ensemble -was billed as the Voice Of God Collective, a singularly ironic title considering Jenkins' self-acknowledged humanist proclivities.

The VOGC transmuted in name to the Blues Collective during Jenkins' later "Blues period," recordings which encompass the likes of S.A.D. (1996, Babel, BDV 9615), Sad and Sadtimes.co.uk. (2000, VOTP VOCD 002). Later recordings include Born Again (And The Religion Is The Blues) (2010, VOTP VOCD 111) and I Am A Man From Lewisham (2010, VOTP VOCD 105). There are also a couple of DVDs which bear witness to Jenkins' singular creativity and are well worth checking out: a live performance Blues Al Fresco documenting an open air free gig with the Blues Collective (2004, Expresso 001) and Ain't Going Yet (2006, Flickering Light 001), a 45 minute paean to Jenkins' serious pursuit of the English game of Lawn Bowls. There was also the ironically titled Songs Of Praise Live! (2007, Babel BDV 2768) which included the numbers "Bhopal" and the bizarrely entitled "Dancing In Ornette Coleman's Head." One of Jenkins' more original masterpieces was Suburbia (Babel BDV 9926) released in 1999 and which again alluded to the guitarist's ambivalent relationship with his home town. It featured amongst others saxophonist Mark Lockheart and drummer Martin France plus the Fun Horns of Berlin.

As mentioned above, his latest (solo) works involve Jenkins employing the use of a low strung guitar in the form of 2014's The Semi-Detached Suburban Home (Music For Low Strung Guitar) and 2015's Death, Ritual & Resonation: Eight Improvised Studies On Low Strung Guitar. These were incredibly original approaches to guitar playing in which the guitarist seemed to almost physically meld with the guitar. The unusual low tuning of the guitar allows a note played to be "de-tuned" by bending the string upwards or downwards, often resulting in a discombobulating effect on the listener.

Jenkins retired from conducting Humanist funerals in 2014 after seven years. He's now returned to researching, composing, writing and recording and although it can be hoped that one day he might return to live performances, his excellent, extensive back catalogue is there to be explored and appreciated.