Bill Frisell: Ramping It Up 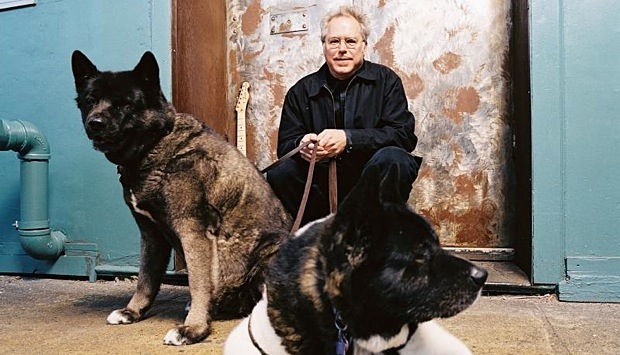 It's so personal and private, what a musician is really doing. I'm the only one who really knows what I'm trying to do. I could be doing something that's internally extremely difficult, and it could be something simple.

It's always been a not-so-hidden truth, especially in the jazz world, that fans only get a small window into what their favorite artists are about. Artists' commercial releases—usually no more than one per year—rarely document the entirety of the various projects with which they're involved in the course of those 12 months. And when you're someone like guitarist Bill Frisell, who seems to be almost endlessly on the road with various permutations and combinations of the expanding cadre of musicians from which he draws for his projects—including his recent Beautiful Dreamers group, duo dates with longtime pedal steel/dobro guitarist Greg Liesz, and a John Lennon Tribute with Liesz and violinist Jenny Scheinman—it's nearly impossible to keep up. With recording technology now cheap enough and transportable enough to make high-quality documents of each and every gig, it's become a great time to fill in those blanks. Of course, the artist has to cooperate and release those shows, but that's just what Frisell has been doing for the past couple of years— releasing digital-only shows as part of an ongoing Live Download Series, which provide the opportunity to hear a greater cross section of the projects with which the guitarist has been involved.

But even when it comes to commercial recordings released in hard media, with marketing pushes from labels like Nonesuch—the label that, until mid-2009, had been his home for 20 years—Frisell has found himself needing more than the usual one-per-year vehicle. With Beautiful Dreamers—a new project that Frisell wanted to record—and his near-decade-old 858 Quartet in need of putting some new music out in the world, Frisell faced a tough choice: stay with Nonesuch and live with one release each year, or dissolve the relationship. It had been Nonesuch that, after he'd established himself with the German ECM label in the early '80s, provided him the exposure and freedom to build his name and reputation as an artist ready to change directions—if not exactly on a whim, then certainly often to the surprise of those who'd just started to think they knew what he was about. Nonesuch, after all, has given Frisell an internationally distributed vehicle for everything from his mid-'90s sextet of remarkable compositional depth on This Land (1994) and the groundbreaking (and controversial) bluegrass/fusion music of Nashville (1996), to the unorthodox guitar/trumpet/trombone/viola of Quartet (1996) and the sample-driven music of the Grammy Award-winning Unspeakable (2004).

"It wasn't like any big thing," Frisell recalls about his decision to part ways with Nonesuch and hook up with Savoy Jazz. "We didn't have a fight, I'm totally on good terms, and I can't even believe how amazing that time with them was. The last thing I want to do is say they weren't coming through; it was just an extraordinary 20 years. I guess it's part of the nature of the times, but they just couldn't get the stuff out as fast as I was making it. It was a mutual decision; they just couldn't keep up with what I wanted to do, so we just agreed for me to try something else. 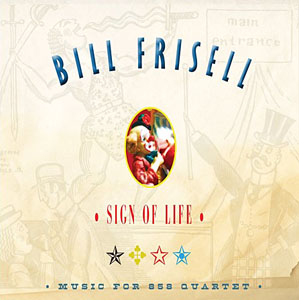 There were maybe a couple possibilities," Frisell continues. "I wasn't sure, at first, with Beautiful Dreamers. I had already booked a studio and was going to pay for it myself—I wanted to do it at that time because the music was ready, and I just didn't want to wait. And I would have put it out myself, but then Savoy just came along, and that was kind of a break for me. And right away, they also wanted to do the 858 thing, and that was really something—they're just six months apart [actually, seven: Beautiful Dreamers was released in August, 2010, and Sign of Life—Music for 858 Quartet in April, 2011]. That was kinda crazy. And it's a little early, and I hate to talk about things that haven't happened yet, but it looks like I'll do an album that's an expanded version of that John Lennon tribute, but it'll be with [bassist] Tony [Scherr] and [drummer] Pato Valdivieso, and I think we're gonna do that in the summertime [2011], so I think it's just bam, bam, bam. It's only been less than a year, but the kind of energy they're putting into it—it feels really good, and they really seem to care about it. I'm not Justin Bieber [laughs]; it's not the most accessible stuff, but they're really trying. I just don't know what's happening with the whole business of selling CDs, but it seems like they're doing everything they possibly can." 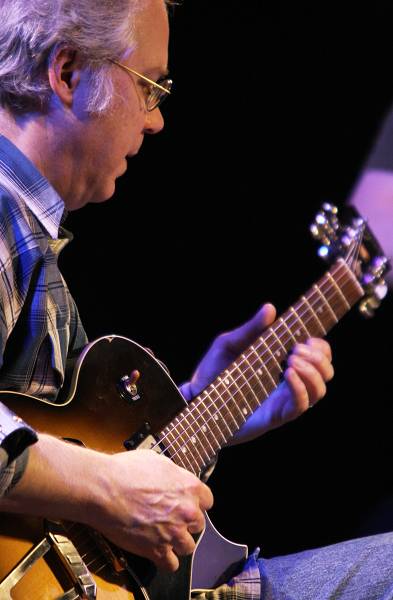 858 Quartet—a new spin on the classical string quartet, where one of the violins is replaced with Frisell's guitar, alongside Scheinman, violist Eyvind Kang and cellist Hank Roberts—has been around for some time, but it's only released one album to date, and while Richter 858 was made available to a larger audience by Canada's Songlines label in 2005, it was actually first issued as part of a limited-run book of artwork by German painter Gerhard Richter, in 2002. So it's been nearly a decade since the quartet last recorded together, despite touring on a semi-regular basis, including a sublime performance at the 2010 Ottawa International Jazz Festival, that came a night after he played with Beautiful Dreamers—Kang and drummer Rudy Royston—at the same festival.

Beautiful Dreamers largely focused on material from its then-upcoming, self-titled debut (its first for Savoy Jazz), but 858 wasn't playing any of the music that would come to be recorded four months later, at Fantasy Studios in Berkeley, California, for one simple reason: Frisell had yet to write material for the new 858 album. The guitarist wouldn't do so, in fact, until just a month before the studio session, when he spent four weeks at an artists' enclave in Vermont, called the Vermont Studio Center. "I've never done anything like that before," Frisell explains. "I was in Vermont for a month, at this Vermont Studio Center. It's in a little town called Johnson, Vermont, and it's about an hour from Burlington, so it's way up there. It's an amazing, beautiful place: mainly painters and sculptors and writers; they've never had musicians before, and they don't even really have facilities for musicians. I was in a painting studio, this empty white room with a desk, and it was incredible just to have that kind of space and time.

"I can't even remember when I've had that much time—maybe when I was just out of college and didn't have any work, and I'd just sit around and practice—maybe it was a little bit like that," Frisell continues. "But I had blocked off that time—my wife is a painter, and that's how I found out about the place— you apply to go there, and there's about 50 artists there at one time. We both went there at the same time, and we each had a studio. I knew I was going to record at the end of that period of time, and I already had older music that I knew we [858 Quartet] could record. We hadn't recorded in a long time, and there was a lot of material already, so I didn't have that pressure where I felt, 'Oh god, I've got to come up with the stuff.' So I just wrote for the sake of doing it. There really wasn't any pressure—I was just free to write and write and write. So I'd go in every day, and whatever came into my mind, I wrote it down. I accumulated all these pieces of paper; it was just a completely different kind of experience. Then they [858] came at the end of the period—the last couple days I was there—and we just read through some of it, we did a little informal concert for the people up there, and then we went and recorded it."

While Sign of Life feels as though it was composed as a near-continuous suite, with certain themes cropping up more than once throughout its 54-minute, 17-song set, that's not how it came about. "I don't even know how many pieces I actually wrote," says Frisell. "I guess that happens later [putting the music together into sequence]. It's always kinda like a puzzle. When I'm actually writing, it's hard for me to see the bigger picture—it almost gets in my way if I think that way. I have to just let whatever comes out come out, and then accumulate all this stuff. It's more in the editing that some sort of a larger form starts to appear, and then I might take something—like, if there's this one melody, I'll do it in a bunch of different ways. That happened a lot on the Disfarmer (Nonesuch, 2009) album; there's a lot of things coming from this one little melody that runs throughout the whole album."

One of Frisell's most intriguing qualities is his ability—unlike some artists who prefer not to look back and revisit older material—to continue mining the same material in a variety of contexts. He can take a relatively simple melody, like that of "Baba Drame," from the pan-cultural The Intercontinentals (2003) and, through patient repetition and subtle variance, evolve it almost imperceptibly, to new places, nevertheless. "That's what I'm hoping for every time I play," Frisell explains. "I don't want it to be the same; it's just in the nature of the way I play and the folks that I play with."

Still, while it's not a particularly novel notion, especially in jazz, that every performance should be different, it's how Frisell works in the context of a group—and in the context of 858 Quartet, in particular—that distinguishes his music. While individual voices come and go, it's less about delineated soloing and more about a collective improvisational approach that, in the case of Frisell, doesn't just mean interpreting the players' individual parts—it's about making decisions, in real time, about what those parts are and who plays them. Frisell's credits in the liners to Sign of Life say it all: "All arrangements (on the spot and subject to change) by Bill Frisell, Eyvind Kang, Hank Roberts and Jenny Scheinman." 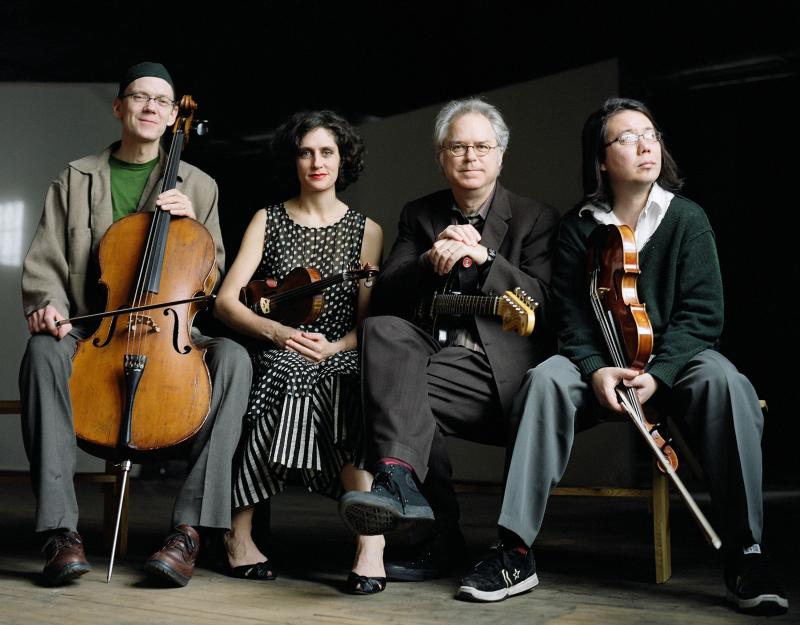 "I don't even really know how it works, exactly," Frisell reveals. "Sometimes I might have four clearly defined individual parts, but I might not say who should play what. We just start playing, and the really quick, instinctual kinds of decisions that these guys are making about who's playing what changes from night to night. Everybody knows what everybody else is playing; everybody has the same information. It's not arranged in a fixed way, so it's more of this spontaneous arranging kind of thing, and it really amazes me. Every time we get back together after some time apart, I'm worried about how I'm going to get this together, how am I gonna figure this out; and then we just start playing, and it's almost like magic the way it happens.