By John Kelman
October 1, 2017
Sign in to view read count 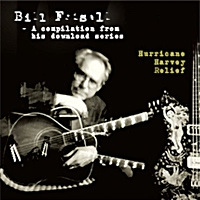 Many musicians may use their celebrity to speak out about issues that matter to them, but only a relatively precious few are actually prepared to put the time, effort and money where their mouths are, creating contexts where much- needed funds can be raised to support those causes. It's even better when they do so in a way that rewards fans who donate to such worthwhile efforts with something tangible, as an expression of gratitude.

Since 2008, Bill Frisell has released a series of download-only live performances from across his long and varied career. Beyond the opportunity to hear high quality soundboard recordings of material that many will only have encountered, so far, on studio albums from In Line (ECM, 1983) through to Beautiful Dreamers (Savoy Jazz, 2010), the Live Download Series—now 21 titles strong—also provides the chance to experience lineups that have never been heard on any of the guitarist's many commercial recordings.

With the massive damage incurred by recent hurricane activity in the southern USA and Puerto Rico, Frisell and his team have put together Hurricane Harvey Relief: A Compilation From His Live Download Series. Culled from five of his Live Download Series releases, Hurricane Harvey Relief not only serves as a good introduction for those who've yet to dip their toes into the series; as a recent press release, first issued on September 18, 2017, makes clear, "Everyone affiliated with this project is donating their royalty or time for this relief effort." It's clearly a win-win.

With the five shows represented already reviewed extensively at All About Jazz, there's little need to go into extensive detail about the individual releases. What's important is that all but one of these seven tracks document lineups that have never before been heard, in precisely these constellations, on any of Frisell's commercial recordings. While it would be impossible to suggest that these tracks are the "best of the best" from the guitarist's Live Download Series, their specific selection and sequencing makes for a compelling 65 minutes of prime Frisell.

Culled from a one-off 2004 tour with organist Sam Yahel and drummer Brian Blade—first released on Live Download Series #004 in 2009 and recorded in New York City—the guitarist's only organ trio takes a considerably different, percussively unusual look at the melancholically blues-drenched "Strange Meeting," first heard on 1983's eclectic Rambler (ECM), and the gentle, often-covered "Throughout," from Frisell's first album as a leader, 1983's In Line (ECM).

Elsewhere, the more extended "Listen," also from The Intercontinentals, comes from the 2003 tour in support of that album, and is the only track to feature the identical lineup; along with Scheinman and Leisz, Frisell is joined by oud and bouzouki player Christos Govetas, percussionist Sidiki Camara, and acoustic guitarist Vinicius Cantuaria. It may feature the same personnel but, as can always be expected with Frisell, the interpretation is another story entirely, as is true throughout the entire Live Download Series #006 (2009) from which this track is drawn.

"1968"—taken from Frisell's funkier, R&B-informed collaboration with Hal Wilner, Unspeakable (Nonesuch, 2004)—closes the album with a performance drawn from the 2006 Seattle show originally released as Live Download Series #007 (2009). Without Wilner's turntables and samples—and without the album's three-piece horn section, synthesizers and percussion—it's a somewhat reductionist version that still manages, after an extreme intro with heavily overdriven, reverse-attacked and otherwise effected guitar, to get down to its hefty groove, even as the lineup of Scherr and Wollesen, along with Frisell's longstanding 858 strings (Scheinman, violist Eyvind Kang and cellist Hank Roberts), manage to bring plenty of collectively energetic improvisation and interpretation to Hurricane Harvey Relief's most outgoing performance.

For those who've already indulged themselves with one or more of Frisell's exceptional Live Download Series entries, this special twenty-second instalment represents support for a very worthy cause. For those who've yet to experience the differences and delights of the series, Hurricane Harvey Relief: A Compilation From His Live Download Series not only makes that same valued donation; it also introduces them to a collection of live recordings from a guitarist whose output can only truly be measured and appreciated through hearing both his commercial discography and this hand-picked selection of some of his very best live recordings. Bill Frisell: Hurricane Harvey Relief: A Compilation From His...