Bill Dahl's The Art of the Blues: A Visual Treasury of Black Music’s Golden Age 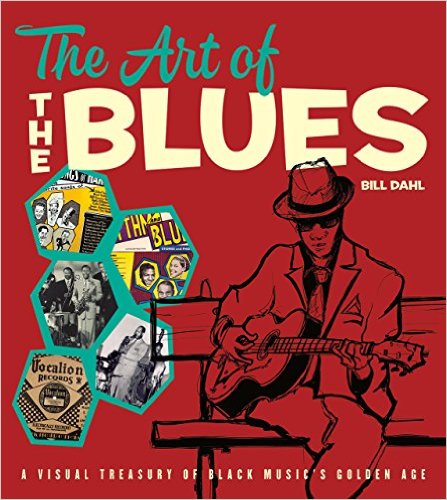 A little learning is a dangerous thing;
Drink deep, or taste not the Pierian spring...
There shallow draughts intoxicate the brain,
And drinking largely sobers us again.

Except when it doesn't, and we believe we know all;
Pride filled and haughty, that Biblical Fall
Awaits us poor fools, we blind to the chance
That we actually know nothing, let go and let's dance...

I was fully prepared to take author Bill Dahl to task for creating a coffee table book for music dilettantes to impress their equally mindless social collateral visiting for an air kiss and a look at the environs. That is when I know I was in big trouble.

While often these publications, intended more for looks than as a source of information, are mere domicile decoration, should one read them, something new may to the reader may be revealed. Such is the case of The Art of the Blues: A Visual Treasury of Black Music's Golden Age. I immediately fell back on my years of reading, Samuel Charters, Robert Palmer, and Stephen Calt describing the romantic notion of the itinerate black minstrel walking up and down the fabled Highway 61, wondering, outside of the social and cultural significance, how could such a book be crafted. This was because my pinched perspective shaped by the myth-making of Tommy Johnson, Robert Johnson, Peetie Wheatstraw, Mick Jagger, and every other Dr. Faustus who sold his soul to the Devil, that I failed to see the larger picture.

And the larger picture is the entire point in The Art of the Blues. This is a collection (though not an exhaustive one) of the artwork used to advertise the music and recordings of that music in a variety of venues. The book traces the evolution of music as a commodity, one advertised for sale, from sheet music at the turn of the last century to long-playing album covers in the latter half of the 20th Century. All of his visual memorabilia is from the collection of Chris James, recording artist and historian who serves as the art consultant on this very art-centered book.

The collection is anchored in the three middle chapters: "Rare Beauty—Prewar 78 Labels," "What a Night, What a Show—Music and Movie Posters," and That Sunny Road—Postwar Blues 78 labels." It is this era the hardcore blues enthusiast will readily recognize. The presentation here offers readers a different slant on the history of the blues, and American Music in general. Dahl highlights the personalities and companies associated with these labels and publishing houses, illuminating the business side of things in American music's early rise. The 78s give way, first to "78 albums" and then long-playing 33&1/3 record albums and their album art.

The photographers are featured, including Don Bronstein of Chess Records and Ernest Withers, Carl Van Vechten, and Raeburn Flerlage. The book ends with "modern" album cover art, bringing the entire story full circle. The Art of the Blues addresses a number of American musics that have a single thing in common, the blues. The blues is that indivisible unit of American music, the Ur-sound, the alpha and the omega. Bill Dahl illustrates with Christ James, the ubiquitousness of this music, this gift of Black America to all of us. That is what Art is, a gift, a grace for which we are not worthy. But ain't it grand we have it.