Before he puts 40 years of performing on 100 albums and 3,000 concerts behind him, this book addresses matters anecdotal, technical, practical, emotional and philosophical with style, panache and élan. 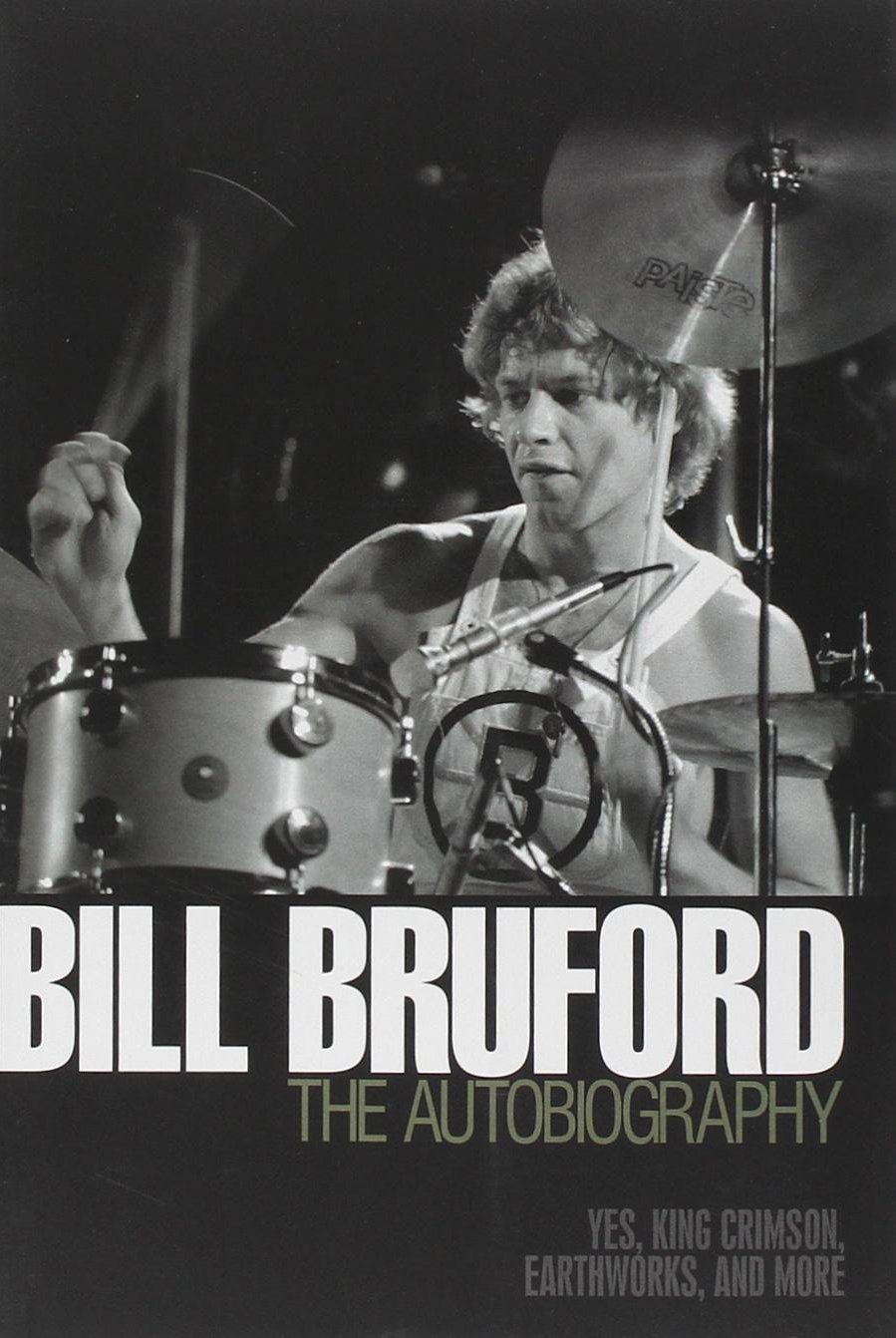 "Veteran drummer Bill Bruford Retires From Public Performance" the AAJ news item announced on January 26, 2009. At progressive rock boards like Progressive Ears it was enough to cause considerable consternation amongst fans who date back to Bruford's early days with Yes and King Crimson, and who have stuck with him through many subsequent Crimson incarnations, two versions of his flagship Earthworks group and his all-improv duet with Dutch pianist Michiel Borstlap.

"Bill has been a key player in progressive rock, full stop. Not just Yes, King Crimson and Genesis but even stints with National Health, Gong and not forgetting his own stuff with UK and Bruford. That he is retiring makes me feel old and is a sad day for prog indeed."

"Dammit, some of the happiest and most carefree times in my life have been spent at this man's shows."

"I'm happy for him. He's choosing a new path. I'm just nostalgic and rather sad for all of us music crazy young lads with a spring in our step and a look of eagles in our eyes. Time is passing."

"Bruford has for years been the thread that spins through my record collection."

Sentimental? Maybe, but Bruford has managed to straddle both the art rock and jazz worlds like few others have. For those wondering why someone like Bruford would decide to retire on the tender cusp of just 60 years old, The Autobiography—in particular the final 40 pages—goes into great detail to answer that question—and it may well come as a great surprise to many. Without giving it all away, Bruford has reached a point where the pluses of pursuing performance are far outweighed by a combination of matters practical and existential.

But as sad an event as it may be to see such a vital and influential musical force hang up his sticks, The Autobiography reads like a combination of "tell all" and "tell it like it is." For those wanting to know what it was like working with King Crimson co-founder and de facto leader Robert Fripp, it's there; for those wondering exactly why he left Yes on the cusp of their greatest success, it's there too. Without getting down and dirty, Bruford reveals just enough about many of the famous names with whom he's crossed paths to grab the attention of inquiring minds, but in an engaging and dryly witty style that makes for an easy, can't-put-it-down read. Rather than being strictly chronological, Bruford travels back and forth in time with ease, making it clear that the choices he's made in his musical life were not just understandable, but inevitable.

Bruford uses the book as an opportunity to definitively address many of the questions, once and for all, that he's tried hard to avoid throughout his career ("Do You Still Like Progressive Rock?" "How Do You Get That Fantastic Sound?" "What Do You Mean, Your 'Spiritual Home With a Bed of Nails'?" "So You Still See Any of the Old Guys?"). As Bruford has pushed ever forward, deserting the art/progressive rock arena in the late 1990s to devote himself entirely to jazz and achieving no shortage of acclaim for albums including Earthworks Underground Orchestra (Summerfold, 2006) and In Two Minds (Summerfold, 2008), he still can't completely escape his past—nor should he. Like it or not, he's one of the fundamental founding fathers of progressive rock, and always will be. That he managed to desert it entirely in the last decade of his career only reinforces his strong work ethic, forward-thinking creativity and desire to look ahead and not back, even against the backwash of fans who would like to hear him play "Close to the Edge" or "Red" just one more time.

Bruford is not at all shy to take credit as an innovator as he describes, for example, his foray into electronic and chordal drums with 1980s-era King Crimson and Earthworks Mark I. Still, he remains humble about raising his own game through exposure to players more advanced than himself. He credits percussionist Jamie Muir—a brief member of the mid-1970s King Crimson that Bruford joined for Larks' Tongues in Aspic (DGM Live, 1973)—for opening his mind to far greater possibilities as a percussionist and improvising musician.

Bruford also gives proper due to artists he recruited for his own projects—artists who raised his compositional/harmonic game like keyboardist Dave Stewart, guitarist Allan Holdsworth, saxophonists Iain Ballamy and Tim Garland, and pianists Steve Hamilton, Gwilym Simcock and Michiel Borstlap—and, for one project, guitarist/pianist Ralph Towner and bassist Eddie Gomez. But equally importantly, rather than patting himself on the back for his many accomplishments (and there were many), he describes them as paths taken with little choice; more than pursuing the avenues that Bruford did because he wanted to, he traveled down those roads because he had to. The drive to stretch or entirely dissolve musical boundaries and constantly push the envelope were endemic to the musical environments he placed himself in, largely ignoring matters of large-scale success. Why, after all, would he leave Yes on the cusp of massive popular acclaim to join the more experimental but less commercially successful King Crimson? Because he felt staying would mean nothing more than repetition, and Bruford was always driven by a desire to change, to grow, to evolve.

That Daevid Allen of Gong found Bruford "too professional" gets, perhaps, to the nub of why Bruford has been so successful—and why he's chosen this moment to retire. When artists stop playing, an unreasonable sense of entitlement often surfaces amongst their fans. But Bruford argues that chartered accountants retire, doctors retire, lawyers retire; so why can't he? That he is actually able to retire says more about how he's managed his career and life than anything else. While some artists are compelled to play until their last breath, others do so for one reason only: they can't afford not to. Bruford reveals himself to be a rather atypical conservative family man in a world often filled with cavalier musicians who are just the opposite. An artist who maximized the value of occasional financial windfalls, just as he accepted the more than occasional remunerative disasters, Bruford may have been moderate in lifestyle, but he has never been anything less than fearless in his lifelong pursuit of moving his music forward through bleeding edge integration of technological advancements and becoming a looser, more interpretive player. Even as he straddled the line between art rock's inherent complexity and jazz's looser, improvisational nature, Bruford remained, for four decades, a perennial student who based his career choices on a simple but absolute refusal to stand still.

In the end, Bruford is retiring because he wants to and because he can. Too few musicians are in that position, and for the aspiring player, many of the life lessons revealed in The Autobiography are to be taken seriously, indeed. Bruford's balancing of life, art and family—not that it was ever easy—is something to aspire to and congratulate. But before he puts 40 years of performing on 100 albums and 3,000 concerts behind him, this book addresses matters anecdotal, technical (though not, perhaps, as deeply as some drummers might hope), practical, emotional and philosophical with style, panache and élan. All in a well-structured 352 pages that never become dry or academic, despite the wealth of information contained within.

If The Autobiography was purely a succession of serious life lessons it wouldn't be the entertaining read that it is. That Bruford manages to combine the serious with the comical, the practical with the absurd, and the truly happy with the viscerally cathartic reveals him to be as talented an author as he is a musician. He's made it clear that, while he's hanging his sticks up, he's not deserting music entirely, with plans to speak on the subject of a career in music, manage his burgeoning Summerfold and Winterfold record labels and more.

The Autobiography, along with two compilation discs—The Winterfold Collection 1978-1986 (Winterfold, 2009) and the double-disc The Summerfold Collection 1987-2008 (Summerfold, 2009)—may serve as notice that Bruford is making a significant change in his life. But with a new album due out this summer and an intrepid and always active mind, this is clearly not the last we'll have heard from a drummer, composer and bandleader who has been a fundamental part of so many lives, creating an unmistakable soundtrack to life that will never go silent, even if he never picks up his sticks again.

Read a chapter from The Biography, Chapter 10: Is it different, being in jazz?, provided exclusively by Bill Bruford and Jawbone Press to All About Jazz.