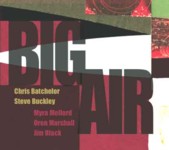 Big Air is the debut album by the genre-mashing transatlantic quintet of saxophonist Steve Buckley, trumpeter Chris Batchelor, and tuba player Oren Marshall, from the UK, and pianist Myra Melford and drummer Jim Black, from the USA. It comes carrying weighty expectations—Big Air's infrequent performances have enlivened the British jazz scene. The band caused a stir at the London Jazz Festival in 2005, and another at north London's Vortex club in late 2008.

The disc amply justifies the buzz. Recorded in 2005, following the LJF, with additional recording in 2006 and mixing in 2008, Big Air is an exhilarating, visceral blend of free jazz, post-bop and messy funk, with electronic flourishes and a little cod mariachi thrown in for good measure.

Much of the music is up-tempo and riotous—Buckley's "The Wizard" and Batchelor's "Song For The Garlic Seller" and "Airlock" are ragged free/funk joys. On such tunes, Melford's sheets of atonal sound fly joyously over Marshall's mutated Crescent City riffs. But there are quieter, spacier moments too. Melford takes prettily to the harmonium on Batchelor's dreamy, lyrical "The Road, The Sky, The Moon," her delicate harmonies combining with Buckley's sonorous bass clarinet and Batchelor's bluesy trumpet to evoke trumpeter Miles Davis' orchestral collaborations with arranger Gil Evans. In the middle section of the otherwise funky "The Trap," Buckley's alto saxophone summons up Johnny Hodges' rapturous balladeering, and Batchelor's trumpet an uber-noir film score from the late 1950s. The "Mexican" echoes in Buckley's "All Good Things," featuring the composer once again on bass clarinet, are not so much spaghetti as peyote western: vivid and intoxicating.

Big Air has been described as "a stripped down version of Charlie Haden's Liberation Music Orchestra with the Dirty Dozen Brass Band for a rhythm section and Cecil Taylor as a featured soloist." And that pretty much nails it. The five-piece group frequently does sound like an orchestra, in part thanks to some overdubbing of instruments, in part because of the sheer full-on passion of the performances. It is indeed as funky and unbuttoned as a chimp on acid, and Melford takes to the Taylor role with winning conviction.

Buckley and Batchelor are exuberantly inventive, Black an unobtrusive powerhouse. Melford, whether doing the 88-tuned drums thing on the piano or getting meditative on the harmonium, is sublime. So too is Marshall, moving between great bursts of low-end flatulence, greasy ostinatos and top-end bird song.

If the band can be said to have leaders, they are the long-time associates Buckley and Batchelor, who between them wrote all the tunes on Big Air. The duo are alumni of bands led by the British composer and keyboard player Django Bates, whose musicianly, but passionately irreverent, spin on jazz Big Air shares. All the musicians soar, the sound is fantastic, and the spirit is tangible.

The Wizard; Song For The Garlic Seller; Airlock; All Good Things; The Road, The Sky, The Moon; The Trap; Bracken.