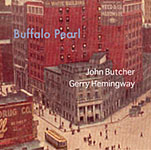 John Butcher's Resonant Spaces (Confront, 2008) featured the saxophonist's use of controlled feedback and recordings in large resonant spaces, trends in his recent work that emphasize the exploratory side of his playing.

This was exemplified on albums such as Cavern With Nightlife (Weight of Wax, 2004), and Geometry of Sentiment (Emanem, 2007). Astonishing as these undoubtedly are, focusing solely on those albums could give a distorted view of Butcher's oeuvre, emphasizing his experimental nature but not fully capturing his warmth and humanity.

The pairing of John Butcher and drummer Gerry Hemingway dates back at least to 2000, when they recorded the duo album Shooters and Bowlers (Red Toucan 2001) on both sides of the Atlantic. It was followed by Hemingway's Songs (Between the Lines 2002), on which Butcher contributed to three tracks of the drummer's song-based album. The two have also toured together several times; Buffalo Pearl is their second duo album, dating from an April 2005 live performance in, yes, Buffalo New York.

Hemingway not only plays drums but also adds voice and electronics. Initially it is his drumming that grabs attention, not the least because it injects considerable momentum into the music. Butcher can often adopt a deliberate, measured approach to playing, sustaining some notes for long periods. It is one of the many pleasures of hearing him solo. But when spurred by Hemingway's driving percussion as on "Head Nickel," he can reveal a different face, rapidly articulating passages, matching the drums stride-for-stride, adding considerable energy to this live setting. However, it is not Hemingway who always sets the pace; there is give-and-take here, sometimes one leading, sometimes the other. The music reflects the length of time that the two have spent playing together; they know each other and sound at home in each other's company.

Towards the conclusion of "Light Queen," the two engage in an impressionistic exchange. With Hemingway deploying subtle use of electronics and understated scraping, it belies the impression that the album will be solely percussion-driven, and introduces a greater emphasis on texture and subtlety. Regardless of the aspect of Butcher and Hemingway's pasts from which this album is approached, there is music here that is satisfying and surprising.