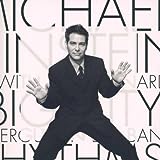 Having created some of the best and most enduring musical catalogs of Great American Songbook composers and some of the best cabaret sets ever heard, Michael Feinstein breaks new ground with his first Big Band album. Growing up in the personal attendance of the legendary Ira Gershwin and in the comforting shadow of such standard bearers as Harold Arlen, Johnny Mercer and Irving Berlin, Feinstein has partnered his smokey vocals with the fiery horns of the legendary Maynard Fergusion for Big City Rhythms, his 18th album.

From the gentle small combos of Ray Noble’s "The Very Thought of You" (which features an ear-singeing solo by Mr. Ferguson) and a piano bar rendition of Hoagy Carmichael’s "How Little Wqe Know" to the all-out swings of Evans and Bostic’s "Let Me Off Uptown" and Rogers and Hart’s "Johnny One Note," Feinstein mixes it up in the big city and rarely gets lost. Though Feinstein’s "One Note" may not be his strongest and his proclamation that "Swing Is Back In Style" may be a bit late, any original song that can offer a comparative music lesson which combines a tribute to Basie and Bing with a dig at Sting (and in similar rhyming style) is a notable composition indeed.

Borrowing from his impressive mental musical archives, Feinstein uses Benny Goodman’s "Lullaby In Rhythm" to demonstratre the wide array of songs that used similar lyrical themes (including "Lullabye of Birdland," "Lullabye of Broadway" and "Fascinatin’ Rhythm"). He also takes a second stab at the composer’s desk with the repetetive but appropriately-paced "Rhythm of the Blues." Though Feinstein’s choices and voices vary widely on this album, it is an impressive departure which looks back with Feinstein’s typical care and attention while looking forward with promise.