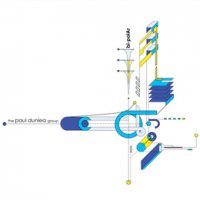 Bipolar disorder is, at its core, about extreme changes in personality and mood. When somebody is diagnosed with said ailment, it's a serious problem, but it can be a positive attribute when an album carries this affliction. Trombonist Paul Dunlea's two polar opposites deal with grooving funk versus staid scenarios, but nobody need worry about these severe mood swings; they're all part of the plan for bi-polAr.

Dunlea is but one musician in a growing crew that's bringing more attention to the small, but fertile jazz scene in Ireland. The Cork-based trombonist has shared the stage with artists like saxophonist Bobby Watson and trombonist Marshall Gilkes, and he's become a central figure in the Irish big band scene, playing with the Cork City Jazz Band, Hothouse Bigband and Dublin City Jazz Orchestra.

For his debut album, Dunlea put together a compact program, clocking in at less than forty minutes, which shows off his compositional personality and trombone chops. As the album unfolds, the music is quietly reflective. Nick Roth's oboe-like soprano becomes the focal point upon its entrance, but Danny Healy becomes the soloist du jour, turning in a beautiful performance on flugelhorn. A double shot of funk follows, giving Dunlea an opportunity to establish himself within his own creations. His work is particularly impressive in "Twists And Turns," which opens with some Gilkes-like riff tomfoolery setting things in motion in a fun and funky manner.

The somber "Slighty" opens with chorale-like promise, and features some appealing horn work, but eventually falls prey to stagnancy. Dunlea quickly turns it around with a swinging number that starts in five and eventually arrives at a straight four feel for the soloing. As the album reaches its conclusion, Dunlea further establishes himself as the Fred Wesley of Ireland by returning to his funky comfort zone ("Throwback"). Slick grooves, shimmering Rhodes and bubbly bass lead the way on this spirited closer, with guest Michael Buckley joining the party on alto flute.

Plenty of debut albums suffer from do-too-much and play-too-long maladies, but that's not the case on this one. bi-polAr is a concise statement which posits that mood swings aren't such a bad thing after all.