By Hrayr Attarian
January 17, 2013
Sign in to view read count 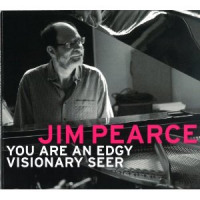 Pianist/singer Jim Pearce's records inevitably draw comparisons to those of fellow ivory tickling wordsmith Mose Allison. The fact that both are genre-bending virtuosi with dry as champagne humor, who play the same instrument is where all similarities end.

The whimsically titled You Are An Edgy Visionary Seer is quintessential Pearce, replete with his characteristic mixture of levity and thoughtfulness. While Allison's trademark is his blues-drenched and folksy raconteurstyle, Pearce's is more urbane, and his lyrics refreshingly absurdist at times and irreverently satirical at others.

"Even Big Monsters Love Music" features such amusingly off the wall verses as:

"The blob's physique lacks definition He digs tunes, played with precision Bebop makes the jelly dude move Bird and Diz put him in the groove."

Guitarist Ken Gregory adds a boppish flair to the song with his complex and crisp sound. The title track, on the other hand, is a witty parody with words such as:

"Jam in the middle with a bass saxophone Bring on the lectrified sarrusophone Microtonal clusters and twelve tone rows Minimalist bluster, anything goes."

There are also more solemn moments that, nevertheless, are delivered with pleasant repartee and plenty of brio in Pearce's warm, husky baritone. "My Last Parade in New Orleans" is about his own funeral, but the sound is far from funèbre, with exuberant rhythms and cleverly constructed clarinet and trumpet solos. Meanwhile, the lighthearted "Old as Dirt" is a lament about the woes of aging that is simultaneously wistful and droll. Pearce's flowing piano tone also bears hints of melancholy.

The instrumental pieces are equally delightful and intriguing, often emphasizing the musical exchanges amongst the members of the core trio. "In The Evening" is a crepuscular ballad where the piano's lilt, the whisper of brushes on trap drums and the clean, walking bass lines create a sublime group improvisation that remains close to the structure of the melody. Pearce exhibits his contemplative side and classical influences on the gentle and sophisticated sonata, "Open Plain." His strong sense of swing, meanwhile, is showcased on the cool and pastoral "Another Waltz for You," featuring reed player Eric South's idyllic flute and trumpeter Joe Gransden's lyrical horn.

Pearce's seventh release as a leader, You Are An Edgy Visionary Seer is an engaging and well-rounded portrait of this uniquely talented songwriter, vocalist and pianist at his mature and creative peak.