Beyond A Love Supreme: John Coltrane And The Legacy Of An Album 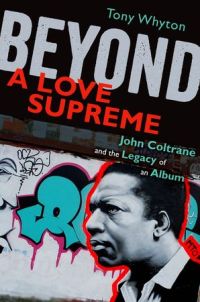 Beyond A Love Supreme:John Coltrane And The Legacy of An Album

Few jazz icons have cast such a long shadow as saxophonist John Coltrane. Since his death at the age of 40 in 1967, his sound has influenced legions of saxophonists and his legend has only grown. And arguably, with the exception of trumpeter Miles Davis, no other musician's sound has been so imitated or absorbed, whether consciously or not. Davis, like Coltrane has also been reified, but Coltrane is probably the only jazz icon to be sanctified. The Saint John Coltrane African Orthodox Church in Filmore Street, San Francisco is the most notable example of the way in which Coltrane, in death, has come to signify so much more than simply a very talented musician who blew a horn. The question, posits author Tony Whyton, is why?

Through the prism of Coltrane's most celebrated album A Love Supreme (Impulse!, 1965), Whyton takes the lid off the cultural mythologies that surround Coltrane and has a thoroughly good rummage inside. Whyton asks why we need jazz icons and why we invest jazz and Coltrane in particular, with spiritual meaning. The author's focus is neither on the musical text nor the creation of A Love Supreme, but on its influence—and jazz recordings in general—on culture at large.

A record, Whyton posits, is not merely a sonic document, but a cultural artifact with multiple meanings and the power to affect people's lives, affect social change, and to be levered politically. Whyton calls for a more nuanced form of musicological enquiry, one that seeks to better understand the "multi-layered nature of jazz recordings." In attempting to get to grips with the often complex cultural dynamics of recordings, argues the author, we can begin to better appreciate "the potential for music to affect change."

In four neat chapters Whyton illustrates how closer study of A Love Supreme and the mythologies that surround it and Coltrane can challenge conventional understandings of music and how it's mediated. In highlighting the complexities of Coltrane as an individual and as an iconic figure, the author raises the sort of questions that don't get much of an airing in official jazz histories. This is one of the primary thrusts of the book; challenging traditional, binary ways of thinking. The same mythic stories and legends that permeate official jazz histories if viewed discursively, states Whyton, "can be used to challenge jazz historiography, uncover underlying ideological viewpoints, and reappraise traditional musicological boundaries."

In challenging existing stereotypes surrounding Coltrane, Whyton highlights how the saxophonist's often contradictory narrative is manipulated to serve certain ideological ends, and how a number of controversial aspects of the Coltrane story are either air-brushed out of the usual discourses or are relegated to a position of insignificance. Coltrane's kicking of his heroin habit in the 1950s, for example, is part of the heroic narrative, yet his later use of LSD in the 1960s is absent in any discourse of the man or how it may have influenced his music.

Why, asks Whyton, do jazz histories tend to ignore Coltrane's post-A Love Supreme recordings as though they are irrelevant? That they are so problematic, the author suggests, says much about the way in which jazz histories are tailored to serve dominant discourses. Whyton also invites reflection on why Coltrane's creative output is still only celebrated in limited terms, despite his unique iconic status.

With Coltrane, Whyton points out, the contradictions abound; it's a commonplace notion that A Love Supreme is a composed suite, yet so too states the author, is the belief that the music was very much an in-the-moment creation (read the excerpt). If Coltrane's legend is largely constructed around his live, improvised performances, then why is the only live performance of A Love Supreme, at the Antibes Jazz Festival in 1965, so downplayed in the Coltrane story, despite being recorded and released? Whyton also examines the significance in the way A Love Supreme continues to be mediated; one example he illustrates is how the contributions of bassist Art Davis and saxophonist Archie Shepp on alternative takes of "Acknowledgment" are so downplayed, as though they had never been in the studio.

In a chapter on the canonization of jazz, Whyton asks why record companies' commercial imperatives are never discussed in any critical detail, as though commerce and high art are incompatible. As Whyton points out, the meticulous packaging and marketing of A Love Supreme, from the choice of album photo to the inclusion of Coltrane's prayer on the inner sleeve feeds into the historicizing process of A Love Supreme as the most spiritual of all jazz albums.

Whyton packs a lot of provocative but well balanced thought into a short space. He doesn't set out to challenge the deification of Coltrane but asks why musicians and fans evidently do feel the need to deify him: "Understanding why we need icons or invest jazz with spiritual meaning lies at the core of the Coltrane legacy" the author states. "By thinking of music in a different way, we have an opportunity to challenge traditional, unreflective assumptions and mystifying statements that permeate jazz culture, and instead engage with jazz composition as a complex and ideologically loaded practice."

Whyton succeeds in placing Coltrane and A Love Supreme in new focus. His compelling insights invite new thinking on jazz icons and their music and a clearing out of the mystifying, often contradictory lines of thought that cloud traditional histories of jazz. What emerge most clearly are the threads of narratives as yet to be fully told.