We continue our exploration of great tunes that—for a reason or another—were concealed to great effect but also never received the attention they deserved. We'll try to remedy that focusing on ghost-tracks, and other ghostly jazz. We were supposed to select ten tunes... but there were at least thirteen more, plus a couple more ghost-related tunes.

Like on part 1 of this special, you can click on the embedded player to listen, look at the playlist below to learn where you can find these hidden tracks, and enjoy the background stories shared with us by musicians who have responded to one straight question: "Why did you choose to hide this great tune as ghost track?." Here is what they had to say.

"Legal Tender" -Ghost title track on Legal Tender (Clean Feed): The tune "Legal Tender" turned out as a boost of energy and rhythm that did not quite seem to belong to this album as a track of its own. It had the feel of a "live" performances rather tha a studio recording; or it may have felt like some sort of "outro." And that is how the idea of a hidden track came up. So "Legal Tender" ended up as a a nice outro/encore for the record, capturing the good vibes we had experienced in the studio!

"Fields of Meat" -Ghost track on Look at All This! (Monkey Farm): This song was included as a ghost track because of creative differences between me and the producer of the album, who didn't feel that the track fit with the other songs on the record. This was the first time I'd used an outside producer for one of my albums, and I lost the fight. Hiding it as a ghost track was the compromise we agreed to.

"Nobody" -Ghost track on Ten (Blue Note): "Nobody" is a composition written by Bert Williams, a very famous Black performer performing in black face. After this song became a hit, in the early 1900s, Williams wrote a song entitled "Somebody" and then another song entitled "Everybody." The motivation to include it in my album Ten was conceptual, as the song "Nobody" is about a denial, an erasure, as Bert Williams subtly was pointing out how Black people are erased from history, or rendered invisible.

Untitled ghost track on The Venice Session (Kuhna): Including that music as a ghost track, an idea by the band's bassist, Danilo Gallo, was a way for us to make a free-wheeling tune even freer... free from the need of having a title, free from having to describe it in the liner notes... just the purest essence of music!

Ohad Talmor, saxophonist of The Other Quartet

Untitled ghost track on Sound Stains (Knitting Factory Records): We wanted to incorporate some totally experimental nusic, a sonic exploration that reflected the context of when this album was recorded. My father was dying of cancer, the last tune of the CD, "Arriving with Every Step," was composed to echo the pain and difficulties of that moment. Having a ghost track was, in a way a reflection, of this painful period. In today's recorded music ecosystem, and how we consume music via MP3 players, it wouldn't make any sense. But then, it did.

And since we were at it, we also asked the authors of other spectral jazz, what inspiration did they find in the world of ghosts.

"Ghost House" Memories of a Barber (El Gallo Rojo): The song is inspired, like others on the Houdini's Cage album, by circus traveling attractions of the beginning of the century. Among the various pavilions—dedicated to freaks, magic shows, miraculous elixirs and so on—there would often be a "ghost house" to amuse, or playfully frighten, children or young-at-heart adults. This is why the song's melody has this nostalgic, childish and somewhat mysterious character...

"Ghost Song #6" Ghost Songs (Neu Klang): All the songs on my album naturally create their own climates while appearing as moving shapes that surprise, just like ghosts. 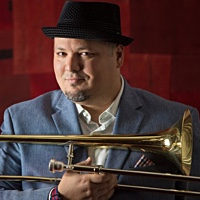 A Selection Of Exciting New Releases