By MARK CORROTO
September 9, 2019
Sign in to view read count 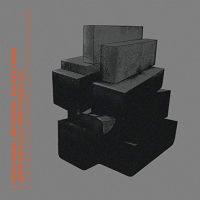 There are two ways to deal with an oncoming storm. One is to run and take cover, and the other is to confront its fury head-on. Sure, it's rare to require music listeners to plan a strategy before pressing play or dropping a needle to vinyl (this disc is released as a CD or 2-LP), but proper precautions are warranted here. Become The Discovered, Not The Discoverer is a follow-up to Keiji Haino, Merzbow, and Balázs Pándi's 2016 release An Untroublesome Defencelessness The release once again redlines the intensity gage.

None of these musicians are strangers to ferocious music. Merzbow aka Masami Akita might be the Leonardo da Vinci of noise. Since the early 1980s he has produced hundreds of recordings of intense feedback and distortion, weaving a sound with as much tactile sensibility as auditory. But then so has the guitarist Keiji Haino (Nazoranai, Fushitsusha) who can also be heard with Peter Brötzmann, John Butcher, Sumac, and Konstrukt, to name but a few recent collaborators.

What make this recording special is the third member, Hungarian drummer Balázs Pándi (To Live And Shave In L.A., Slobber Pup, Metallic Taste Of Blood). His combination of grindcore and death metal drumming acts both as an accelerant and an adhesive property. The four tracks presented act as four movements of the same symphony. Akita's savage electronic plague and Haino's hallucinatory garage guitar sounds are propelled by Pándi's muscular attack. Where sometimes Akita's noise can lose focus, Pándi utilizes a horsewhip by way of his thunderous pulse. He does the same for Haino's guitar and his refreshing use of electric base, which he utilizes as a break from the fury on 'I Want to Learn How to Feel Everything in Each Single Breath (Part 1)." That break lasts for but a moment, letting you know you are sitting in the eye of the storm.