Gerald Cleaver / Uncle June: Be It As I See It 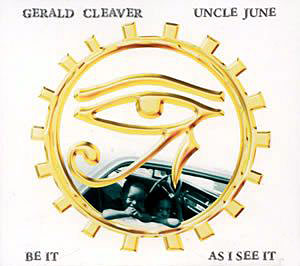 Drummer Gerald Cleaver has a CV which takes in names like Mario Pavone, Joe Morris, Charles Gayle and Roscoe Mitchell. Of these names it's the last which inspires not only Cleavers's music, but also his appetite for working in new musical forms, and striving for new forms of musical expression. It's hardly surprising, then, that Be It As I See It, his fourth as a leader in his own right—and in the company of his Uncle June ensemble, featuring reed man Tony Malaby and bassist Drew Gress—is as reflective of the times we live in as it is with a broader historical continuum.

In tackling the theme of the Great Migration of the last century in musical form, Cleaver sets himself no mean task, and it's to his credit that he avoids straightforward narrative in doing so. Instead, the music comes in collage form, and with a little imagination it's easy to see how it works. Thus, the opening almost three-minute blast that is "To Love" comes on like an abstract statement of intent, even while, through its measured ferocity, it encapsulates the aural shock that's an integral part of moving from a rural to an urban environment.

But, as Cleaver makes clear, narrative has little or no part here, so while the intimation of the free in "Alluvia" carries with it implications outside the purely musical sphere, it also unexpectedly conjures up the notion of freedom as group understanding, exemplified by the likes of Henry Cow.

With its juxtapositions, "Gremmy" highlights how deep this musical understanding is between the players. Pianist Craig Taborn melds the whole thing together, but as with everything else in this program it seems somehow improper to single out any contribution, given that this is such a profoundly "group" music.

As the final track, "From A Life Of The Same Name" has the effect of closing things out both literally and metaphorically; clarifying the degree to which Cleaver and his cohorts have pulled off the considerable feat of reconciling a past with a present, without wallowing in tiresome, neo-conservative staples. The result is a program of highly individual music, beautifully realized.