Back Door: BBC In Concert

By Bruce Lindsay
September 22, 2013
Sign in to view read count 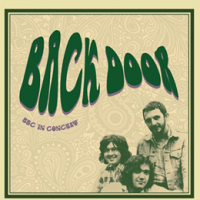 The Back Door story belongs to a brief but rather glorious time in British popular music. A time when a free-blowing jazz trio could emerge from the resident band of a northern cabaret club, a summer season in seaside variety theatre, afternoon jam sessions and the band of an iconic figure from the British blues boom. As BBC In Concert ably demonstrates, the band managed to blend these rather disparate experiences together to create some entertaining music.

In 1968 bassist Colin Hodgkinson and saxophonist Ron Aspery met at the Starlite Club in Redcar. A summer season followed, in Bournemouth on the south coast, after which Aspery played sessions around London and Hodgkinson joined Alexis Korner's group. Korner's role in promoting and developing the British blues scene, as a performer and broadcaster, was fundamental. He was the compere of the broadcast from which this recording was taken, but although he's credited as such on the sleeve (along with vocals and guitar), none of his compering activity seems to have made it onto the record.

A return to the Starlite Club brought drummer Tony Hicks into the frame and Back Door was born. The band gained support from the New Musical Express, drew the attention of major labels such as Warner Brothers (which signed the band) and supported Chick Corea at Ronnie Scott's club. By the time the trio recorded this set of tunes for the BBC, on 5 July 1973, it had already recorded two albums—the second at New York's Electric Lady studio.

Back Door was described variously as playing jazz, jazz-rock and fusion. BBC In Concert has a strong blues feel—"Roberta" and "Linin' Track" from Lead Belly, and Robert Johnson's "Walking Blues" join four songs credited jointly to Hodgkinson and Aspery. There's a welcome economy to the songs: "His Old Boots" is the only track to clock in at more than 4 minutes and that's only by a second or two.

Hodgkinson's bass guitar sound gave Back Door a unique sonic identity, combining rhythm and lead playing, often in the instrument's upper register. His work on this session matches many guitarists of the time for fluidity and expressiveness. Two instrumentals show another side to Back Door's style. "Folksong" is, despite its title, the jazziest of the seven tunes, featuring some raucous sax from Aspery. "Forget Me Daisy" is a calming, whimsical, tune—folkier than "Folksong," Asprey's flute reminiscent of Didier Malherbe's work with Kevin Ayers.

Lovers of the etymological enigma may wish to ponder this one: the album sleeve and the label on the record refer to "Back Door," but Hodgkinson's notes (and his website) refer to "Backdoor." One word or two, it's the three musicians that really matter on BBC In Concert and this vinyl record is a fine reminder of their talent.