An inspirational figure in British music circles, Korner was already versed in black music when he met Cyril Davies at the London Skiffle CluBorn Both musicians were frustrated by the limitations of the genre and transformed the venue into the London Blues And Barrelhouse Club, where they not only performed together but also showcased visiting US bluesmen.

Mick Jagger and Paul Jones were also briefly associated with Korner, whose continued advice and encouragement proved crucial to a generation of aspiring musicians. However, disagreements over direction led to Davies' defection following the release of R&B From The Marquee, leaving Korner free to pursue a jazz-based path.

While former colleagues later found success with the Rolling Stones, Manfred Mann and Cream, Korner's excellent group went largely unnoticed by the general public, although he did enjoy a residency on a children's television show backed by his rhythm section of Danny Thompson (bass) and Terry Cox (drums). The name “Blues Incorporated” was dropped when Korner embarked on a solo career, punctuated by the formation of several temporary groups, including Free At Last (1967), New Church (1969) and Snape (1972). While the supporting cast on such ventures remained fluid, including for a short time singer Robert Plant, the last two units featured Peter Thorup who also collaborated with Korner on CCS, a pop-based big band that scored notable hits with “Whole Lotta Love” (1970), “Walkin'” and “Tap Turns On The Water” (both 1971). Korner also derived success from his BBC Radio 1 show that offered a highly individual choice of material.

He also broadcast on a long-running programme for the BBC World Service. Korner continued to perform live, often accompanied by former Back Door virtuoso bass player Colin Hodgkinson, and remained a highly respected figure in the music fraternity. He joined Charlie Watts, Ian Stewart, Jack Bruce and Dick Heckstall-Smith in the informal Rocket 88, and Korner's 50th birthday party, which featured appearances by Eric Clapton, Chris Farlowe and Zoot Money, was both filmed and recorded.

In 1981, Korner began an ambitious 13-part television documentary on the history of rock, but his premature death from cancer in January 1984 left this and other projects unfulfilled. However, his stature as a vital catalyst in British R&B was already assured. 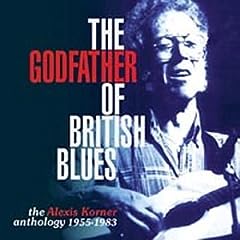 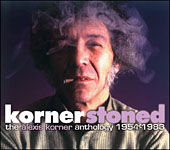 All About Jazz musician pages are maintained by musicians, publicists and trusted members like you. Interested? Tell us why you would like to improve the Alexis Korner musician page.