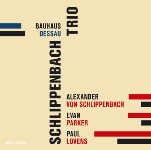 The Schlippenbach Trio is now decades old; perhaps it's not surprising there are only a few improvised music groups that have lasted that long. In this trio's case the matter of pedigree goes without saying, but whether or not the depth of their familiarity with each others' work makes for sterile, unrewarding music, is a question that easily comes to mind.

On this occasion it isn't, as it's far from sterile and unrewarding. Evan Parker, in particular, is responsible for this outcome. He plays tenor sax exclusively, and it's clear that his vocabulary on the horn is in a state of flux. This is hardly surprising, given the degree to which he's worked the music's farthest reaches throughout his career. When this music was caught for posterity in November of 2009, his work demonstrated the hallmark of opening out and perhaps embracing the work of Lou Gare or Fred Anderson in its linear flow. Having said that, Parker's use of silence on the lengthy "Bauhaus 1"—a product more, perhaps, of premeditated deployment rather than length of breath—has the effect of giving the music some in-the-moment structure, even when his band mates are opening up and giving vent to torrents of ideas.

Pianist Alexander von Schlippenbach's approach to the piano is not so much more measured, by comparison with his earlier work. as it is the result of him listening more overtly. This is apparent by the time the tenth minute of the piece rolls around, where the pianist and and drummer Paul Lovens are fashioning music out of small sounds. Parker, ever alert to the implications of the moment, accordingly lays back—insofar as such a description is applicable to music of this strain. The music is brooding some 22 minutes in, however; but this is as much the product of the deep listening that can be taken for granted with musicians like these as it is anything else.

It can also be taken for granted that "Bauhaus 2" and "Bauhaus 3" are more than mere afterthoughts for all their comparative brevity. The dialogue between Schlippenbach and Lovens, in the opening of the first of these, is a summary of their abiding knowledge of each other's music, while it's notable that in the lower reaches of the tenor sax's range Parker is ruminative and, if anything, even more conscious of space. That strain is more apparent on the latter, where the music's irresolution seems guided by a single mind.