By TROY DOSTERT
November 18, 2020
Sign in to view read count 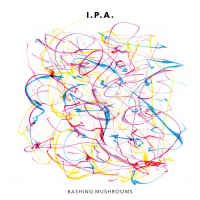 Comprised of an impressive roster of Scandinavian all-stars, I.P.A. might only need a better name if the group is to break through to wider notice. Harnessing its commitment to post-bop freedom to thoughtful tunecraft, the band's music is both accessible and tough-edged, cerebral and hard-grooving in equal measure. The quintet's first Cuneiform release, I Just Did Say Something was a highlight of 2016, and its follow-up on the venerable label, Bashing Mushrooms, is another winner, albeit with somewhat more muted colors and a subtler feel.

Tenor saxophonist Atle Nymo and trumpeter Magnus Broo are both capable of dynamic flights and tenacious vigor; one of the delights of I.P.A. is hearing the two in animated conversation, as on the album's title track, a blistering cut that evokes the Don Cherry / Ornette Coleman nexus that inspired I.P.A.'s creative mission when it formed in 2007. But there are more layers to I.P.A. than just its first-rate horn duo. Vibraphonist Mattias Ståhl adds warmth and ruminative density, while bassist Ingebrigt Håker Flaten and drummer Håkon Mjåset Johansen sustain the group's ability to stay rooted in rhythm while still remaining unconfined by it.

Nymo, Broo and Ståhl share the composition duties roughly equally, and it's a credit to the group's single-minded vision that the pieces have a consistent feel despite their differing provenance. Softer textures often predominate, as on the opener, Nymo's "Kudeta," a catchy number driven by Ståhl's insistent ostinato and with ample room for expressive, searching solos from Broo, Nymo and, finally Ståhl also, as Nymo and Broo take over the ostinato part. Subdued pieces like Broo's "Bamse" and Nymo's "Farmor" keep the focus on the tunes, with plaintive melodies and the openness needed for patient dialogue and measured exchanges.

When the group does raise the intensity level, the results are consistently satisfying. "Go Greta," Ståhl's tribute to Swedish climate activist Greta Thunberg, sounds like an Eric Dolphy composition, its angular melody and bouncy rhythm an ideal vehicle for entwining solos from Broo and Nymo. And "Barnen" is a terrific slow-burner, with an understated melody that contrasts piquantly with the surging rhythmic undertow, bringing out Nymo's most assertive playing on the album. But superlative soloing and strong grooves aside, it's really the combined talents of all five musicians, playing as one, that gives I.P.A. its identity—and Bashing Mushrooms is another fine effort from this veteran quintet.