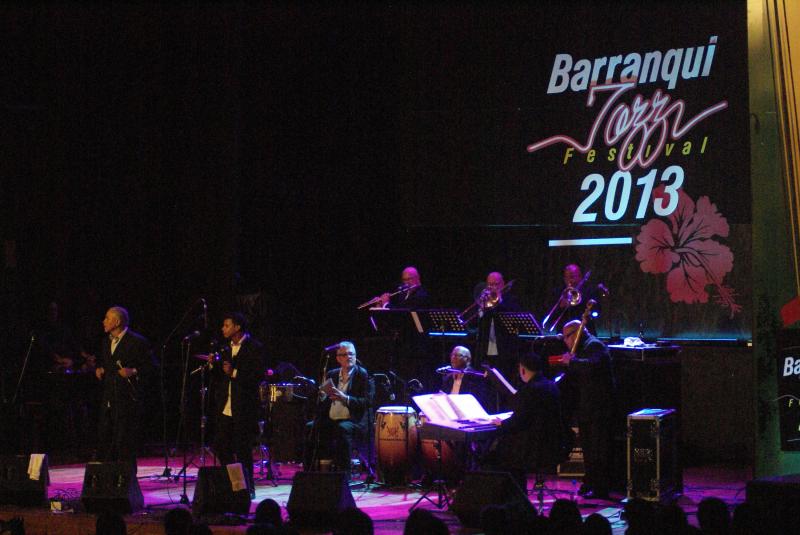 By MARK HOLSTON
September 18, 2013
Sign in to view read count
Barranquijazz
Barranquilla, Colombia
September 4-8, 2013
"Audiences in Latin America are totally different than in Europe," Italian clarinetist Gabriele Mirabassi told me while we shared a bus ride from the international airport n Barranquilla, Colombia to our hotel. "Here, if you connect with them, people become passionate and emotionally expressive. In Europe, someone will come up after a concert and say something like, 'Oh, that was a very intellectual project you presented tonight.' They try to be cool. Here, it's a real joy to perform for audiences that appreciate what you do on a purely visceral level."

Mirabassi, who has lived in Brazil and has performed extensively in the region, was on a five city tour of Colombia. At the Barranquijazz Festival, now in its 17th year, the clarinetist's animated stage presence and his emphasis on Brazilian choro-style works made a strong impression on the annual event's opening night and validated his assessment of Latin American jazz fans.

Thanks to the ongoing efforts of a trio of local jazz aficionados, the festival has grown into one of the finest events of its kind in the greater Caribbean basin. Samuel Minski, a print shop owner and publisher of books of cultural and historic themes, is joined by co-directors Antonio Caballero, a local radio host well known for his obsession for jazz and Latin music, and Mingo de la Cruz, a veteran Avianca Airlines pilot. For close to two decades, they've managed to keep the festival functioning at a high level while working to create a sustainable jazz culture in this hot and humid port metropolis of some two million souls.

Considering that the city is one of the largest ports on the Atlantic Coast between New York City and Recife, Brazil, it's somewhat amazing that Barranquilla isn't better known. Its annual carnival is the largest outside of Brazil and earned the city the title of "The American Capital of Culture" for 2013. It was also once the stomping ground of Colombia's famed novelist Gabriel Garcia Marquez and other notable poets, painters and intellectuals. In 1921, it also became the first city in Colombia to host a live performance by a visiting jazz group. The ties with traditional Latin music are also strong, due to the role of trade in connecting Barranquilla with such other Caribbean ports as Havana, Santo Domingo and San Juan. 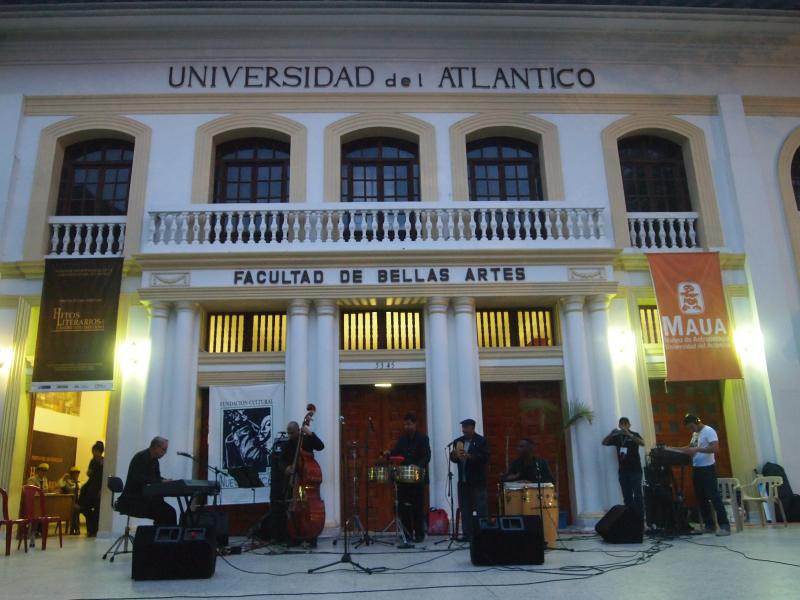 What makes Barranquijazz so compelling is its long-perfected formula for programming. Over five nights of concerts presented in a number of the city's performance spaces,, including an open air finale presented in one of the city's main plazas, audiences have the opportunity to discover and enjoy styles of jazz and jazz- related genres that reflect a true world view of the music. An iconic figure or two from the ranks of U.S. legends are usually present, as are artists representing Afro-Cuban Latin jazz and salsa and Brazilian idioms. Add a European group, several national acts, and one or more notable instrumentalists who are featured through the festival as guest soloists with various groups, and you have a finely-tuned recipe for success. It's fair to say that in its 17 years of existence, Barranquijazz has presented a veritable who's who of North American jazz, Brazilian music and Latin jazz.

This year, Steve Kuhn and Freddy Cole, two dissimilar but complementary artists from the U.S., were the flag-carriers for the mainstream jazz tradition. Pianist and composer Kuhn and his trio proved to be a revelation to those who associate him with a cerebral, avant-garde approach to his performances. His range of source material, all rendered in his wholly individual style, was as curious as it was successful. He tapped the Henry Mancini songbook for the lovely but seldom performed "Slow Hot Wind," incorporating a fragment of Miles Davis' version of "Summertime" and an oblique reference to the Latin standard "Besame Mucho" into his arrangement. He also served up a refreshingly different take of the Kenny Dorham standard "Blue Bossa" and a rhythmically playful version of frequent collaborator Steve Swallow's "Ladies in Mercedes."

For his part, Cole and his backing trio, all dressed in dark suits, were a picture of sophistication that the jazz world has increasingly lacked in recent years. Cole's easy manner and burnished voice well served a set list that included such well known tunes as "Route 66," "The South Side of Chicago," and "I Love Paris," which was done in an up-tempo, pseudo-Latin style that drew a warm response in the packed "Jumbo" salon of the local Country Club. Even young Colombians who have scant knowledge of the legacy of Cole's brother Nat responded passionately to the group's mostly laid back, ballad oriented set. Cole's facile piano work and the contributions of young guitarist Randy Napoleon were a strong factor in the concert's success. For an encore, Cole confirmed his balladeer's credentials on a touching version of Edu Lobo's "Just To Say Goodbye" (Canto Triste). 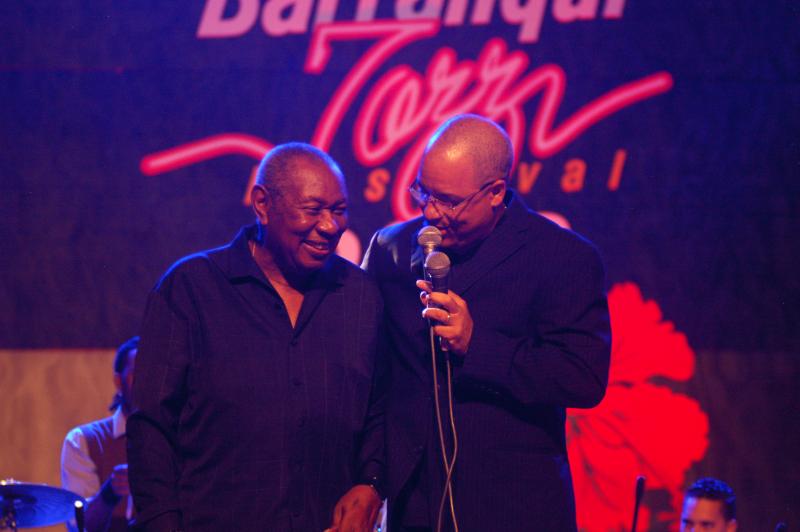 Those with a taste for Latin jazz and salsa had much to celebrate with this year's edition of Barranquijazz. Four ensembles proved to be exemplary proponents of tropical jazz styles that range from the 1940s to today.

A Colombian ensemble headed by keyboardist and arranger Milton Salcedo, presented a jazz fusion-tinged set on the opening night, with two percussionists, a trap drummer and electric bassist backing a two man horn frontline of woodwinds and trumpet. The group specialized in trickily breaks and intricate arrangements in the mood of 1980s- era fusion groups. A highlight was the appearance of guest artist Nestor Torres, the famed Miami-based Puerto Rican flautist. The resulting version of the classic Cuban tune "Maria Cervantes," by the late Noro Morales, provided one of the   festival's most memorable moments.

Cuban pianist Emilio Morales and his quintet, Los Nuevos Amigos (The New Friends), with veteran percussionist and vocalist Enrique Lazaga playing a key role, mined the rich traditions of such 1950s-Cuban styles as mambo, son montuno and cha-cha-cha on such venerable fare as "Cachita" and "La Negra Tomasa." Morales, who carries the bulk of the solo duties, displayed a commanding, vivacious style, grounded in conservatory-polished fundamentals and a deep understanding of Cuban genres.

Celebrated Cuban sonero (salsa vocalist) Issac Delgado and his 15- member band, which included a full rhythm section, five horns and two backup singers, provided a perspective on the most recent evolution in Afro-Cuban music, timba. Although influenced by the rhythmic intensity of rock, the style, at least in Delgado' hands, retains the strong character of traditional Cuban dance music. The singer, who had recently recorded LOVE, a tribute to Nat "King" Cole, invited Freddy Cole on stage to reprise their recorded version of the bolero standard "Quisas, Quisas, Quisas."

Rounding out the festival's strong Latin orientation was the appearance by the 13- piece Venezuelan salsa orchestra Bailatino. The group's name is, tellingly, a combination of the words "baila," which means simply "dance," and "Latino." With two trombones and a flute, the group boasts the kind of salsa dura (hard salsa) swagger once personified by such artists as Eddie Palmieri and Willie Colón. Young sonero Marcial Izturriz, just 18-years old, enthralled the crowd with his expressive vocals, which were reminiscent of the style perfected by the late salsa sensation Hector La Voe. Yet another special guest of the festival, trombonist Jimmy Bosch, delighted both band members and the audience with his aggressive soloing and charismatic vocals. 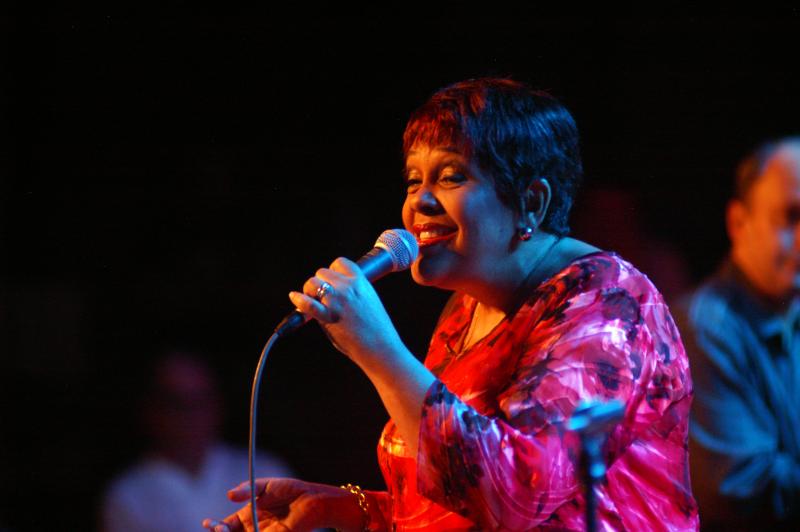 Finally, the festival's traditional Brazilian flavor was well represented by vocalist Rosa Passos and by woodwind artist Paquito D'Rivera, who was backed by Trio Corrente, a sensational young Brazilian ensemble that's updating the piano trio sound that was so pervasive in the country in the 1960s.

Although the Country Club audience was expecting to hear a program of traditional Jobim-focused bossa classics—and some kept shouting "Bossa Nova!"—Passos largely avoided the predictable standards. Her version of the Cartola classic "As Rosas Não Falam" (Roses Don't Speak) was mesmerizing, while her attention to the under- appreciated repertoire of singer/guitarist/songwriter Djavan provided a new point of reference for neophyte Brazilian music lovers. Passos was backed by a quartet that included New York City-based pianist Helio Alves.

For his part, D'Rivera focused on songs from his new album, Song for Maura, playing both clarinet and alto sax. The always effervescent musician featured both Cuban and Brazilian-style tunes and particularly enjoyed cross-cultural aspect of the trio's interpretation of works by Cuba's "Chopin of the Tropics," the late Ernesto Lecuona. Particularly entrancing was D'Rivera's nostalgic homage to his mother Maura, a masterpiece of melodic beauty.

The festival also presents free, open air concerts around the city virtually everyday of the event, featuring both national and international talent. This year, groups based in Poland, Holland, Colombia and Germany were featured.

Throughout the festival, I benefitted from the presence of several other knowledgeable invited journalists and music critics. A constant companion was Ned Sublette, the renowned musicologist, record producer, author and performing artist known for his extensive background in Cuban music. His knowledge of Latin jazz and its many derivatives is comprehensive. Also in the small troupe of journalists was Elmer Gonzalez of San Juan, Puerto Rico, himself a noted scholar of assorted varieties of tropical Latin music, and three Colombian colleagues. Five of us participated in a panel exploring the "What's the Future of Jazz?" theme, presented at the city's historic public library. I also participated as a guest on a live broadcast for the country's equivalent of NPR, Radio Nacional.

Just a several hour flight from southern and East Coast cities in the U.S., Barranquijazz should find favor with those seeking a festival experience that's more than a bit removed from the ordinary. Colombia is inexpensive, safe, and welcoming. There are many reasons why Barranquijazz 2014 should be on the "must attend" list of jazz enthusiasts around the world.