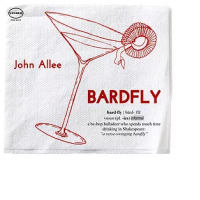 Overshadowed by the notoriety of Shakespeare's works, it is less known that accompanying music was regularly incorporated into his Globe Theatre productions. The music of William Byrd, Thomas Morley et al, was played there on lutes, hautboys (oboes), recorders and, for more martial and ceremonial aspects, trumpets. Conversely, the Bard's words have been used in more modern music productions by artists such as Cleo Laine (Shakespeare and All that Jazz Fontana Records, 1964) , Duke Ellington (Such Sweet Thunder Columbia/Legacy, 1957), Deborah Shulman (The Shakespeare Project Summit Records, 2019), and now here in a fascinatingly unique manner by the very talented John Allee and crew.

With Bardfly, Allee—a well-known thespian himself—adds a unique perspective on Shakespeare's words on a baker's dozen selections. The music and arrangements are all Allee's—and they are terrific. They are compelling to the point of quasi-enhancement. The entire album is engaging and a throwback to hipper days when beat poets droned their and Allen Ginsberg's and Lawrence Ferlinghetti's lines over the coolest of cool jazz, all wafting in smoke-filled coffeehouses.

Backed by a fine jazz ensemble, it is Allee's slick composing, dramatic delivery, and acting chops that make this recording a standout and not a disingenuous novelty. A higher tenor, Allee's vocalizing and speak add a neat hipster's flair and humor to the proceedings (e.g. the opener, "Bardfly Blues"). Think Lord Buckley with a better voice.

Allee swings, too ("Philomel/Hold Thy Peace," and a Mardi Gras-grooved "Tomorrow is St. Valentine's Day"). One is drawn directly into the lyrics as they are flavored by Allee's superb compositions. The grooves fit hand-in-glove with the verbiage ("Hungry Lion," "Come Away Death"). Allee shines brightest on the slower fare ("Until the Break of Day," "Mistress Mine," "Sigh No More") where he can be as expressive ("Green Willow," "Come Away Death"), offbeat ("Hungry Lion") or restrained as a line requires. His delivery, phrasing, and use of dynamics are impeccable.

The quintet behind Allee covers the material and offers fine solos. Pianist Mahesh Balasooriva comps and solos with taste. Saxophonist Javier Vergera and trumpeter Matt Von Roderick respond and solo in fine congruence with Allee's various grooves which are laid down superbly by bassist Dominic Thiroux and drummer Aaron McClendon.

Like Elizabethan fare, Bardfly is not for all tastes. However, this effort is so distinctive and the music-lyric meld so apropos, that the trochees and pentameters won't distract. It's a fun album without pretense that is certainly worthy of a listen. Think of it as a present day and very enjoyable "Night in Bardland." SRO. No cover. No minimum. No Pee Wee. Drink up.

Bardfly Blues/Samingo; Until the Break of Day; Tomorrow is St. Valentine’s Day; Philomel/Hold Thy Peace; Mistress Mine; Sigh No More; The Hungry Lion; Green Willow; Full Fathom Five; Heigh Ho the Holly; Come Away Death; Never Come Again; The Wind and the Rain.