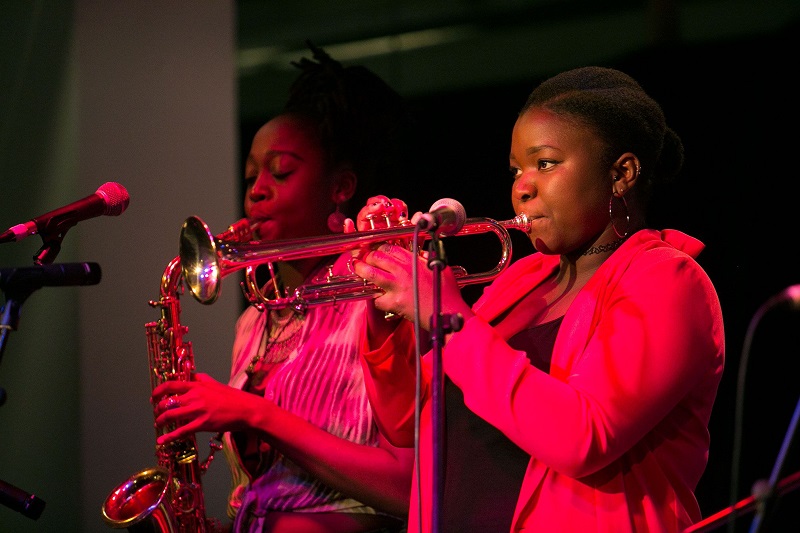 BY IAN PATTERSON
December 7, 2017
Sign in to view read count

BAN BAM is a new, one-day festival by Improvised Music Company—an initiative to address the gender imbalance in jazz/improvised music. A related All About Jazz article covered the conversations by industry professionals around the gender issue that took place in the afternoon. This second BAN BAM article turns its attention to the music side of the festival. A wickedly varied line-up of five acts attracted a good crowd to The Complex, a studio, performance and gallery space run by an artists' collective.

The opening gig of BAN BAM featured saxophonist/composer Catherine Sikora, who recently returned to her native Cork after a decade in New York. With five recordings as leader to her name as well as collaborations with Han-earl Park, Ross Hammond and Eric Mingus, Sikora stepped out on her own with her debut solo recording Jersey (Relative Pitch Records, 2016)—an adventurous outing that garnered critical approval. It was as a solo artist that Sikora performed at BAN BAM.

A series of long, tenor fog-horn notes sounded, gradually bending and shortening, infused with a faint strain of blues. The saxophonist soon ventured into freer territory, her tightly coiled motifs spiralling ever-faster. Sikora, however, altered the pace to good effect, moving between slower plateaus and rapid, more expansive forays—her improvisation compositional in the arc of its logic. A stronger melodic vein colored the second piece, Sikora juggling relaxed phrasing with knotty flurries, as though deciding which path to dive down. Opting for the latter course, Sikora took to the task with total conviction, like a terrier shaking the life out of a bone. It was, however, with a soft landing that she guided the music home.

Switching to soprano, Sikora combined dashing technique with mellifluous intent, her mazy course alternatively biting and meditative. What was perhaps most impressive about Sikora's short but intense performance was her flow of ideas; dynamic narratives—tales of the unexpected—that twisted this way and that before resolving gracefully. An imaginative musician that would enrich any context.

The very sizeable Polish community in Ireland has left its mark in multiple ways—economically, socially and, naturally enough, in the arts. Polish-born, Dublin-based multi-media artist Dorata Konczewska brought her highly contemporary and personal vision of popular music to BAN BAM with a set that wedded song form, visuals and real-time sampling.

Konczewska opened with "Angel Eyes," a striking slice of electro-pop marked by the contrast between the dreamy melancholy of her vocals and bassist Ogie Doyle's more animated groove. The wall behind the musicians filled with artsy video of naked bodies, drawing the eyes and rendering the music as soundtrack. Stood before her synth, patches and electronic gadgetry, Konczewska's use of visuals added a sensual dimension to an otherwise fairly static stage presence.

"Psycho Suzie," with its infectious bass ostinato and hypnotic vocals—real time and looped—provided a set highlight and wouldn't have sounded out of place on a Susanne Sundfør album. The sparer architecture of the slower "January Blues" put Konczewska's attractive voice in sharper relief, while the dissonant electronics and brooding layered vocals of "Bag of Cats" painted a more dystopian picture, albeit one with a pronounced rhythmic finale.

The gothic electro-pop of "Curl Up and Die" was a little too short to take off. More satisfying an untitled number with a lilting melody and slow-grooving rhythm that worked its way under the skin. The final number was the most rhythmically upbeat of the set; driven by Doyle's funk bass, Konczewska sculpted vocal harmonics of otherworldly beauty.

Konczewska first made her way in Limerick a decade ago as a standards jazz singer but by following her own muse she has developed a unique and charismatic musical persona—one whose language is both daring and accessible.

Whether solo, in duos with the likes of Joe O'Callaghan or Barry Guy, or whether tackling John Cage's "Sonatas and Interludes" for prepared piano, Izumi Kimura has earned a reputation as an outstanding and most adventurous pianist/composer. Cora Venus Lunny is as much at home in classical orchestras as she is playing Jimi Hendrix with Nigel Kennedy. A member of Clodagh Simonds experimental group Fovea Hex and Nick Roth's Balkans-inspired Yurodney, Lunny's solo recording Terminus (Conscientae Diatribe Recordings, 2014) is further proof of her fearless approach to music.

It was a coup for BAN BAM to bring together two of Ireland's finest contemporary musicians for the first time in a specially commissioned project.

The music unfolded as a journey of constant revelations, the two musicians embracing space and silence as tools to frame their dialogue. For much of the opening piece pianist and violinist played simultaneously, following genteel parallel tracks denoted, nevertheless, by marked freedom of expression. From a pocket of quiet, subtly lyrical repose Kimura and Lunny suddenly shifted up several gears, the pianist's rumbling left-hand motif countered by lightening right-handed glissandi, accompanied by the violinist's punchy staccato rhythms. A gradual releasing of collective tension only foreshadowed a dramatic, breathless sprint for the finishing line.

On the second piece, Kimura's peg-dampened piano strings brought a burrowing, gamelan-esque rhythmic undercurrent to Lunny's lead, the violinist's initial melodic spirals giving way to fiercely sawing exclamations of Hitchcock-esque intensity. The third piece felt like unfinished business, with Lunny's lyrical intro soon swamped by her thrillingly intense, nerve shredding attack. Kimura's initial stirrings grew increasingly bolder, the two musicians soon swept up on a powerful wave that was utterly transporting to behold. The force gradually diminished, the notes fading to silence, but this only served as another launching pad for further purposeful exploration, as though seeds planted before were germinating. The short but brilliant final conversation sparked lyricism and fire -the transitions seamless, the empathy pronounced.

Kimura and Lunny's riveting improvisations heightened the senses and stirred the blood, the emotional energy of their music fairly animating the crowd. Simply too good a collaboration to be a one-off.

Palestinian-born, Dublin-based singer/songwriter Ruba Shamshoum has had a busy year, writing and recording her debut album, Shamat (Self-Produced, 2017), touring in Palestine and England and playing the IMC's Hotter Than July festival. Here, leading a five-piece band, Shamshoum showcased material from Shamat and beyond, with debutant Chris Guilfoyle bringing comping nuance and improvisational edge to the leader's finely crafted songs.

Throughout the set Shamshoum left plenty of room for her musicians to express themselves; Berrills' unaccompanied clarinet intro to the enchanting slow-burner "Ya Layl La Trooh" cast a quiet spell, while Guilfoyle's melodic invention on the swinging "Layla," followed by Berrill on alto saxophone, injected vibrancy into a pretty song. Spare, brushes-and-bass jazz arrangement suited the intimacy of the gorgeous "In The Depth"; you could imagine Shamshoum's seductive, quite powerful vocal delivery captivating in an unaccompanied or duo setting. Shamshoum dedicated "Burkan" (volcano in Arabic) to the Middle East. The sparks came from Guilfoyle's meaty extended solo and Shamshoum's rousing vocal finale, closing out a memorable concert in style.

A songwriter and singer out of the top drawer, Shamshoum is a name to watch out for.

The honor of closing out BAN BAM fell to London-based Kokoroko, a seven-piece Afrobeat collective led by trumpeter Sheila Maurice-Grey. Kokoroko was playing its first ever gig in Ireland and it wasn't long before they had the audience up and dancing to its infectious grooves.

A vibrant set finished with an extended percussion feature, the band's polyrhythms fusing powerfully. But for the curfew, the audience would have lapped up a lot more of Kokoroko. Sixty years after Fela Kuti formed the jazz/highlife band Koola Lobitos—while also studying at Trinity College of Music in London—his legacy continues to inspire a young generation of black UK musicians to fire up this life-affirming music. Kokoroko is a terrific band—intoxicating music to lift the spirits.

Nobody thinks it's strange to see an all-male band on a stage. It's not considered as a gimmick or something out of the ordinary. There is no reason therefore, to perceive an all-female band that way. Certainly the crowd in The Complex who enjoyed the five acts during BAN BAM saw nothing strange in seeing women tearing it up on stage.

Why there aren't more mixed-gender bands in jazz and improvised music is another question. Events like BAN BAM are starting to ask the questions, and more to the point, as the festival's Creative Producer and IMC Marketing Manager Aoife Concannon explains, to look for the solutions.

"Since we made this decision a year ago and started looking at the issue it has become engrained as permanent policy. It's not an option to program without thinking about gender balance or finding those female artists that are maybe hidden away in corners and are not as obvious. Finding them and trying to develop and support them has just become something that we think of every time we think of programming anything, which is how it should be."

However, as the panel discussions earlier in the day noted, the roots of the problem of gender imbalance in music are more fundamental. Changes in the music education system from an early age are necessary and this is another area that BAN BAM and Improvised Music Company is keen to address.

"Looking ahead in the next few years we're going to think about how we can engage with the education sector in a small but meaningful way," says Concannon, "working with the curriculum and thinking about how we can engage with children at primary and secondary school level in a role modelling capacity. We'd like to do workshops and talks to encourage girls who are studying music to be more adventurous and to feel that they can go and have a career in music, because there is a huge drop-off for girls in particular when leaving third level when it comes to music."

Of course, there's no quick fix to gender imbalance, as first and foremost, the perceptions engrained in society regarding gender and roles need to change. Concannon and IMC, however, are well aware of the task before them. "It's a long-term engagement and it has to be because change will only happen over many years."