The Thing: Bag It! 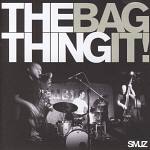 One of the most appealing facets of The Thing— saxophonist Mats Gustafsson, bassist Ingebrigt Haker Flaten and drummer Paal Nilssen-Love—is the visceral experience of seeing them play live. Huddled closely on stage, wearing matching Ruby's BBQ of Austin t-shirts, dripping with sweat and manhandling their instruments, the trio is one of the modern wonders of avant-garde jazz.

The band, with Gustafsson solely on tenor instead of the expected baritone, headlined a bill at Brooklyn's Zebulon last month with local monstrosities Sparks and Little Women, the second gig of a 15-show North American tour in support of Bag It!, their 11th release and eighth for the Norwegian Smalltown Superjazzz label. The 45-minute set was given over to three versions of the album's title track and featured the priceless quote from Gustafsson: "It's a real pleasure to play, trying to nail this Bag It! piece, but always failing." Joining the group for two of the three attempts was longtime collaborator Joe McPhee on second tenor. The versions resolved into two Thing favorites, "Baby Talk" by James Blood Ulmer and Lightning Bolt's "Ride the Sky," before the group closed out the evening with McPhee's "Alien."

But the one problem with The Thing thus far has been that almost none of their albums effectively captured the live experience. 2005's Garage came close and 2006's Action Jazz even closer but not until Bag It! has the band's ferocity been depicted so well in a studio environment. Some of the credit must be given to engineer Steve Albini, of Big Black fame, who highlights the trio's punk aesthetic with spacious recording that does not sacrifice their 'gentler' moments. And Smalltown Superjazzz's stark design—primarily black and white pictures of the band performing at Ruby's—is fittingly bleak.

Besides the Gustafsson-penned title track and the collective "Hot Doug," the rest of the first disc of the double CD set continues the group's penchant for covering songs from outside the jazz canon and doing so with more sincerity than, say, The Bad Plus. But now brutal takes on The Ex ("Hidegen Fujnak A Szelek") and 54 Nude Honeys (a perky "Drop the Gun") are elbowing for attention alongside some fascinating interpretations of music by Swedish sound artist Åke Hodell, Duke Ellington's "Mystery Song" and Albert Ayler's "Angels." This album is also the first Thing release to feature Gustafsson indulging his recent taste for electronics. As a bonus, Bag It! comes with a second disc: a 31-minute improvisation, "Beef Brisket (For Ruby's)," perhaps the first and only free jazz paean to smoked meat.

After almost a decade of playing together, beginning as a Don Cherry cover band, working with guests Joe McPhee, Ken Vandermark, Jim O'Rourke, Thurston Moore, Otomo Yoshihide and even contributing a track to last year's David Bowie tribute album Life Beyond Mars, The Thing have avoided becoming a static entity. See them live if you can, but if not, turn up Bag It! extra loud and make sure to have plenty of wet wipes handy.