Home » Jazz Articles » Dan Adler: Back To The Bridge

By Bruce Lindsay
December 1, 2010
Sign in to view read count 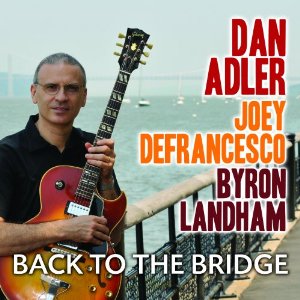 Back To The Bridge is produced by three talented musicians whose ability to interact, solo, provide rhythmic support and, above all, to groove makes this album a terrific advertisement for the classic organ trio and for the enjoyable straight-ahead jazz it produces. While this is guitarist Dan Adler's second album as leader—following 2009's self-produced All Things Familiar—he records here for the first time with organist Joey DeFrancesco and Byron Landham (DeFrancesco's regular drummer). The three musicians sound like they've played together for years, however, such is the tightness and sympathetic interplay of their performances.

Adler, like his fellow Israeli-born musician Ehud Asherie, is a fan of straight-ahead, post-bop jazz and readily communicates this love in his playing. He cites Joe Pass as his major influence but his choice of covers shows Adler's openness to writers and instrumentalists from a wide range of musical backgrounds. His take on Clifford Brown's "Joy Spring" is melodic and fast-paced, driven by Landham's propulsive playing. By contrast, Adler's arrangement of Joe Bushkin's 1941 composition "Oh, Look At Me Now" is almost casual in its laid-back but silky style while on Oscar Peterson's bluesy "The Smudge" Landham swings gently as first Adler and then DeFrancesco solo with a delightful lightness of touch.

Adler's own compositions are good-natured, cheerful tunes that swing effortlessly and highlight Adler's beautiful intonation. The one exception is "Good Old Days," which has a more reflective and thoughtful tone—Adler's comping behind DeFrancesco's organ solo is gentle and warm.

The music on Back To The Bridge is from familiar jazz territory. But this is popular jazz territory as well, and deservedly so—Adler, DeFrancesco and Landham deliver an unpretentious, enjoyable and beautifully played set of tunes.