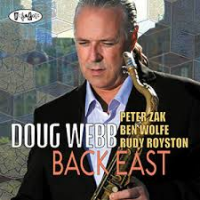 Back East, tenor saxophonist Doug Webb's second 2015 release for the Posi-Tone Records label, is not unlike a thirteen course meal in which every course is sublime, yet the portions are rather small and each dish is cleared quickly, leaving one with an intense desire for more of a particular flavor. Needless to say, there is a practical reason for the programming of short tracks on the part of independent labels attempting to release significant jazz recordings and generate enough black ink to survive. In an age when jazz radio is one route to what's left of the record buying public, a disc such as Webb's with only three cuts exceeding five minutes has a better shot at getting some airplay. Looking at it another way, perhaps we all can use a break from CDs filled with tracks exceeding ten minutes which feature players who sound as if they want to jam the sum total of their knowledge into every single solo.

As it turns out, wanting a little more of Webb isn't such a bad thing after all. Contrary to conventional wisdom, saxophone heroes don't have to be longwinded to make an impact. There's nothing artificial or contrived about Webb's relatively brief solos, and the record certainly doesn't sound like he was put in a position of making artistically unsatisfying compromises. Small doses of the leader's artistry help in finding common ground between a distanced, cerebral appreciation of his style and simply enjoying his offerings without subjecting them to excessive thought or analysis. Webb's ability to engage with diverse material and express different facets of a singular identity are the defining characteristics of Back East. The record's success also hinges on the contributions of a band including pianist Peter Zak, bassist Ben Wolfe and drummer Rudy Royston, all of whom roll with the changes while maintaining their own identities as well.

The saxophonist's work on a number of tracks packs a decidedly visceral wallop. Early on during the up-tempo "254 West 82nd" (one of his seven original compositions) Webb generates acute tension in part by repeatedly cutting phrases short and rapidly grasping new ones while constantly driving forward. A sense of an almost unbearable urgency defines "Mr. Green," from the opening head through solos by the leader and Zak. Both of these tracks benefit from the constant presence of Wolfe's steadfast bass line, as well as intense, slippery, rapidly evolving time figures and fills by Royston. Loud, pointed and resolute, "Snicker's Lament" is slow-to-medium tempo blues with a serrated edge. Invoking heartache and fury in equal measure, Webb pounds out a virtual detonation of notes in a structure wound so tightly that the music denies indifference and doesn't offer a means of escape.

While these tracks sometimes bear the influence of the late 50s, early 60s John Coltrane, throughout the record Webb draws from a larger, more flexible palette. Spurred by Zak's active, full-bodied accompaniment, which frequently hovers over and crowds the saxophonist, Webb's lively, bossa-like interpretation of the standard "If Ever I Would Leave You" achieves parity between a loosening of inhibitions and honoring the tune's romantic promises. Throughout an original waltz, "Sally's Song," Webb treads with grace and grit, his rich, middleweight tone animating the solo as much as the thoughtful manner in which he dispenses ideas. Webb frontloads a turn on Jobim's "Vivo Sonhando" with a number of airy, graceful runs before inserting, brief, fanciful impressions between pieces of the tune's melody.

In today's overcrowded field of tenor saxophonists, most of whom possess an abundance of technique plus the desire to huff and puff till they blow the house down, Webb stands apart by virtue of the smart, logical manner in which he moves through every solo, taking heed of a crack rhythm section, and making a visceral impact that never goes over the top. Do good things come in small packages? In the case of Back East, the adage is true in spades.