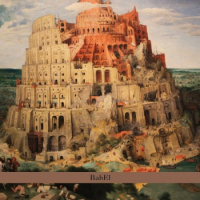 Toss a dart at the world map and you are likely to hit a country of origin for a band member in saxophonist Uri Gurvich's ensemble. The Israeli-born son of Argentinian parents assembled an international cast for his first release The Storyteller (Tzadik, 2009). The same band of Bulgarian bassist Peter Slavov, Cuban drummer Francisco Mela, and Argentinian keyboardist Leo Genovese return for BabEl with the addition of Moroccan oud and percussion provided by Brahim Fribgane on three tracks.

Although the music is multicultural, it is not the musical equivalent of a simple pidgin language. This band, which also makes up the core of Mela's Cuban Safari, an Afro-Cuban update on an electric Miles Davis sound, speaks multiple languages fluently. Where Gurvich might write tunes from an Eastern perspective, his band will pull the sound towards the Afro- Cuban, South American, and rock-fusion sounds of jazz.

ADVERTISEMENT
With the help of Fribgane's oud, the disc travels to the Middle East on "Pyramids." Gurvich's saxophone traces the melody, with a sound that is more Brooklyn than Tel Aviv. His approach, and that of his band, is to speak a modern jazz language without disguising their accents. Those accents are informed by jazz and rock. "Nedudim" opens with Genovese's electric keyboards speaking Joe Zawinul's fusion as the piece expands into an electric-rock groove. What starts as an acoustic tango, the song "Alfombra Magica" blends a blues-feel progression that gets a bit of electronic treatment at the conclusion. The band's mission statement song "Scalerica de Oro" is a traditional Sephardic Latin wedding tune that blossoms from a paced inauguration through some electric keyboards and into song.

The joy expressed in Gurvich's music is the same joy John Coltrane discovered when he applied his African-American gospel roots to jazz and world music. With BabEl it's just the reverse that is true.