Maximize your visibility at All About Jazz by upgrading your musician page from standard to premium. With it, you'll receive All About Jazz home page exposure, a highly stylized / ad-free musician page with bonus features and benefits, an ad, plus you control where you sell your music and so much more.
Learn More
232 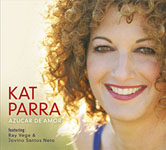 The first striking thing about Azucar de Amor, Kat Parra's sophomore effort, is that she has assembled a hell of a band: the credits are littered with Latin music stalwarts such as pianist Jovino Santos Neto, percussionist John Santos, and trumpeter Ray Vega.

Those whose names may not be so familiar also sound great. This is the case with trombonist Wayne Wallace, whose languid solo enriches his arrangement of Erroll Garner's "Misty." And then there's the versatility of pianist Murray Low, "el chinito de las teclas," as Parra calls him just before his fine solo on "Pedacito de Mi Vida."

The second noticeable attribute of the disc is the strength, and indeed the durability, of a number of the songs. One song that didn't stand out on the first listening, but after repeated playing has all the inevitability of a hit single, is "Un Grito." It is, in fact, not an Afro-Cuban number, unlike virtually all the other tracks on the record; it's a Lando (an Afro-Peruvian song form), a genre recently brought to greater prominence among the jazz audience with "Aires de Lando," from Maria Schneider's recent masterpiece Sky Blue (Artist Share, 2007).

Despite these strengths, the record can be uneven—even within the space of a single song. On the new reading of "A Night in Tunisia," Parra's background singing with vocalists Orlando Torriente and David Chaidez walks a fine line between a charming kind of 1940s formality and a cloying Manhattan Transfer-like sound: here it dips a bit too far in the cloying direction. But then the performance redeems itself with a coolly masterful percussion segment. By the time the singers admonish us to "baile los ritmos del mundo" toward the end, all is forgiven.

The closest parallel to Parra's singing in the world of Latin music is probably the redoubtable Afro-Peruvian diva Susana Baca: both have thinness in their voices. If anything, Parra's is richer and more flexible, but paradoxically she sounds less memorable: she has yet to create a kind of vocal identity as fully developed as Baca's and which will match her evident virtuosity.

Parra's reading of an old Sephardic ballad, "Esta Montanya D'Enfrente," sung in Ladino (a rapidly-disappearing cousin of Spanish) lifts the record to a more rarefied plane of significance. Parra and her bandmates seem entirely unconcerned with a narrow kind of authenticity (unlike the rest of the record). Pianist Low's airy, melancholy piano, a shakuhachi (Japanese flute) played by Masaru Koga, and Parra's sincere vocals turn this timeless, plaintive ballad into something unique and new.

Not only that, Parra subtly but powerfully reminds the listener that what might be called "Hispanic music" is temporally and geographically vast. And it is not done with a bombastic anthem, but with a fragile poem of resignation.