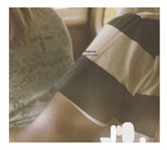 Following up its 2004 Rune Grammofon debut, Fabula, Skyphone's Avellaneda may be the most beautiful near-pop record of 2008. This Danish trio makes music so song-like that it could, with added lyrics and a different approach to production, easily exist in the kind of dreamy experimental post-rock terrain of Iceland's Sigur Rós. In its seamless integration of technology and acoustic instrumentation it shares much with Norways's Svalastog and the profound Woodwork (Rune Grammofon, 2006), but there's a more definitive compositional focus. Skyphone also shares much in common with the more soothing aspects of Crime Scenes (Punkt Recordings, 2006), released to complement the kind of forward-thinking music heard at Norway's one-of-a-kind Punkt Festival, now entering its fourth year.

As is often the case with Rune Grammofon releases, there's little information provided other than, in this case, that the material is written, performed and produced by Thomas Holst, Keld Dam Schmidt and Mads BÃˆ¸dker. Still, sometimes retaining a little mystery means that the only thing that can be assessed is the music itself. With simple melodies, gentle and sometimes ambient landscapes, and compositions that can only be called songs despite rarely conforming to conventional song form, Avellaneda's eleven tracks are at once hypnotic and arresting.

A little research reveals that Holst is primarily a bassist, though his library of field recordings adds to Skyphone's naturalist ambience. Dem Schmidt contributes modular synths and, most notably, the largely acoustic guitars that sometimes place Skyphone in Bill Frisell territory, despite the group's folkloric references being thousands of miles distant from the guitarist's Americana roots. BÃˆ¸dker's analogue synths, samples, toy instruments and other found sound create electronic soundscapes that blend organically with the trio's acoustic textures—aural choices that are never overbearing, never making less than perfect sense.

"Cloudpanic" begins with a simple electric guitar loop, processed accordion-like pulse and fragile electronic percussion that, more often than not, sounds like ticks, pops or scratches. Themes evolve gradually as more layers are added—and occasionally dropped out for brief moments to create dynamic flow—although the song never approaches any kind of sonic density. The slowly emerging changes of "All is Wood" are supported by an in-the-weeds marimba-like sample that suggests the group has listened to both composer Steve Reich and intrepid pop star Peter Gabriel, although these are amongst the group's many references, neither significant enough to be considered defining stylistic markers. Horns, distorted guitars and a processed dulcimer-like sound are all part of a huge palette that, alongside Skyphone's melodic and ambient-centric approach, gives each song its own quiet personality.

While musicians around the globe are finding their own ways to integrate technology with acoustic instrumentation, Scandinavia appears to be ground zero. Every new group plays a part in gradually expanding a singular concept into a broader spectrum, with Avellaneda's beautiful combination of singable melodies, folkloric acoustics and otherworldly electronics a real treat for tired ears.