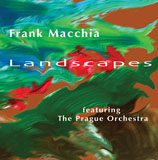 Tenor saxophonist/composer/arranger Frank Macchia has made a significant album that follows-up his Grammy-nominated Emotions (Cacophony, 2006). Again utilizing the strings of the Prague Orchestra under the direction of Adam Klemens, Macchia has submitted another ambitious work to the public.

Listening to Landscapes, the two things that come to mind are film scoring and the influences of Aaron Copland and Gil Evans. In the liner notes, Macchia reports that in preparation and inspiration for this album, he listened to Keith Jarrett/Jan Garbarek's Luminessence (ECM, 1975)and Stan Getz's Focus session (Verve, 1962) with the Eddie Sauter Strings. While Macchia is featured on every track for both melody and solo performances on tenor, he sounds unlike Getz and probably closer to Garbarek, with a darker and slightly rough-edged tone.

The centerpiece of the album is the six part "Landscapes Suite - for Saxophone & Orchestra." Each of the sections reflects a different part of the world and shows Macchia's skill at weaving melody with the artful use of orchestration and strings. While "Desert Heat" has an almost majestic movie music realization of, perhaps, the Sahara Desert, "River Rapids" uses a harp and strings to simulate the movement of fast moving water. Even though "Jungle Life" is not a domestic reference, there is a specific Aaron Copland influence in the melody statement.

The suite is book-ended by an opening and closing presentation of six Americana songs from public domain and, in one case, the Great American Songbook. It's almost impossible to draw a connective line between Lawler/Blake's "The Sidewalks of New York," presented as a jaunty movie-type theme, the traditional "Shenandoah," a soaring bit of Americana, and the down-tempo traditional tune "Down In the Valley." Instead, they provide a setup for what is to come within the body of "The Landscape Suite."

Equally, the closing songs defy rationalization. The traditional hymn, "Deep River," is presented reverentially, as expected. V. Rose's standard, "Avalon," is given a short, swinging ride and is the closest thing to a jazz treatment on the album. Finally, Creamer/Layton's "Way Down Yonder in New Orleans" is presented in a tempo usually reserved for the Alter/DeLange favorite "Do You Know What It Means to Miss New Orleans?" Shades of post-Katrina New Orleans; is this a protest song or merely a way of keeping us off-balance? Whatever the case, it does work and puts a specific stamp on Macchia's style of arrangement.