BY HRAYR ATTARIAN
January 10, 2013
Sign in to view read count 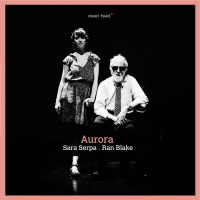 Well known for his empathetic work with audacious singers such as Jeanne Lee, Dominique Eade and Christine Correa, Blake exhibits supreme camaraderie with Serpa, anticipating and enhancing her nuanced vocal expressions. His playing shimmers like waves in the moonlight on the pastoral "When Autumn Sings," as Serpa's articulation of the undulating melody colors the tune with muted hues. The duo's sharp and witty exchange on an angular version of "Fine and Dandy" makes it swing with its own internal logic. Together with Serpa's operatic reading, Blake's surreal tones transform "The Band Played On" into a droll, eccentric and dramatic interpretation of this classic standard.

A sophisticated and impressionistic musician, Blake is an undisputed master of contrast. His dark and intriguing "Mahler Noir" opens with an expectant and resonant solo, evolving into a mellifluous soundtrack with snippets of ballads before closing with a percussive arpeggio.

This intimate date, impeccably recorded by Clean Feed, brings together two intrepid and idiosyncratic artists for an engaging and delightful album of shard musical vision.