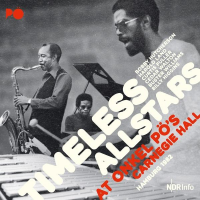 They were timeless and they were all stars. Bobby Hutcherson, Harold Land, Curtis Fuller, Cedar Walton, Buster Williams and Billy Higgins got together in the early 1980s to play post-hard-bop jazz in the studio and on the US and European performance circuits. The band recorded three fine albums between 1982 and 1986. At Onkel Po's Carnegie Hall makes that four. Recorded live at the famously louche Hamburg club, it was taped for broadcast by German radio station NDR. The release kicks off a series of previously unissued albums celebrating Onkel Po's glory years.

At Onkel Po's Carnegie Hall has four tracks and a total playing time of 75 minutes. An average playing time of nearly 19 minutes per track might suggest a blowing session in which all six musicians get to solo in predictable succession on every track. But the tunes are presented more imaginatively than that, with extended theme expositions and mostly just three soloists on each track.

The album opens with a furiously paced reading of Buster Williams' bop bouncer "Tokudo." It is followed by Victor Young and Ned Washington's ballad "My Foolish Heart," a showcase for Bobby Hutcherson, who maintains the momentum of the set's opener by taking the middle section into double-time. Cedar Walton's mid-tempo ballad "Clockwise" cools things down temporarily, before the speed picks up once more with Harold Land's classic slice of hard bop, "Mapenzi," the title track of an album he had co-headlined with Blue Mitchell in 1977.

All six musicians crossed paths over the best part of three decades, with Land and Hutcherson particularly frequent collaborators. Among the pair's early projects was A New Shade Of Blue, an outstanding spiritual-jazz album made under Land's name for Bob Shad's Mainstream label in 1971. Buster Williams was the bassist on the session, along with Bill Henderson on piano and keys, Billy Hart on drums and James Mtume on congas. Reissued on vinyl and CD by We Want Sounds in 2018, A New Shade Of Blue, like At Onkel Po's Carnegie Hall, is timeless.

About Timeless All Stars