Tori Handsley: As We Stand 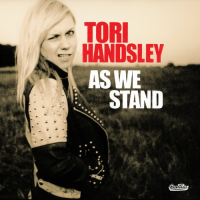 Harpist Tori Handsley is a prominent sideperson on London's alternative jazz scene.She has worked with reed player Shabaka Hutchings, tenor saxophonist Nubya Garcia and keyboard player Nikki Yeoh among other luminaries. She is perhaps best known for her contributions to two albums by Binker and Moses, the ferocious semi-free duo led by tenor saxophonist Binker Golding and drummer Moses Boyd. Handsley is a featured guest on the group's landmark albums Journey To The Mountain Of Forever (Gearbox, 2017) and Alive In The East? (Gearbox, 2018).

Not before time, Handsley gets to make her own-name debut on As We Stand. She leads a trio featuring Moses Boyd and Melt Yourself Down bassist Ruth Goller. It is a harp-led album with a difference, liberated from the instrument's soft-focus stereotype. Clue: a sleeve photo with attitude. Clue: the presence of Boyd and Goller, two musicians capable of ripping the nose clean off your face. But the album is no knuckle-scraping thrash either. It has delicacy and nuance to match its grit and sinew.

There are some resonances here with the recordings US harpist Brandee Younger has made with drummer Makaya McCraven, who has recorded with Shabaka Hutchings, Nubya Garcia and other Londoners. But As We Stand chimes most strongly with the work of Guinean kora player Ba Cissoko, whose Electric Griot Land (Totolo, 2006) plugged in the acoustic West African harp, added some effects pedals, and dramatically extended the instrument's palette. In the process, Cissoko took care not to throw the baby out with the bathwater. Handsley is similarly mindful: As We Stand is not a refutation of Dorothy Ashby or Alice Coltrane's legacies but an extension of them.

At the risk of labouring the Coltrane connection, As We Stand's conceptual theme—the existential crisis humankind has created for itself by damaging the environment—can also be seen as an extension of Coltrane's legacy. While it is perilous to ascribe actions and opinions to people who are no longer with us, Coltrane in 2020 would likely be foregrounding environmental concerns along with spiritual ones. And equally likely, she would enjoy the modern spin Handsley is bringing to the harp.

Rivers of Mind; Convolution; Polar Retreat; Out of Sight, Out of Mind; Home; Settling into the Sun; Intwination; As We Stand; Kestrel; What's in a Tune.