Home » Jazz Articles » Avishai Cohen: As Is ... Live at the Blue Note

Avishai Cohen: As Is ... Live at the Blue Note 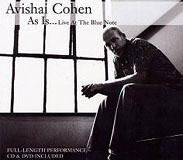 It's impossible to deny the sheer musical virtuosity of bassist/composer Avishai Cohen; he can hold his own with anyone on the double bass, and he's a wonderful electric bassist as well. He's also a gifted composer whose intricate, often Middle Eastern-inflected pieces are, while well within the jazz idiom, unique—hear one of his songs, and you'll know it's his.

Furthermore, Cohen and his core trio of drummer Mark Guilliana and keyboardist Sam Barsh were, until recently, one of the best touring groups in jazz (Barsh left the group in 2006 and has been replaced by Shai Maestro), and possibly the tightest.

Yet there's been a grating quality to Cohen's recorded work. His 2006 Continuo CD had a smug grandiosity that substituted musical precision for heart, and his 2005 album At Home tried to merge too many styles, as if to show that the group could play anything.

Well, a great live group should be able to make a great live record. Cohen's new As Is ... Live at the Blue Note, culled from two nights at the New York club in 2006, features the trio augmented with trumpeter Diego Urcola and saxophonist Jimmy Greene, and if it isn't perfect, it's close enough to be far and way the best live jazz record of the year. Every song here trumps its studio version, and somehow all the weaknesses have become strengths: the group precision isn't cloying, it's thrilling; the classical and Middle-Eastern influences don't sound self-conscious, they sound organic and essential.

Nothing could be better than the album opener "Smash, which produces a palpable tension from the juxtaposition of its airy theme and Cohen's bumping, hiccupping electric bass vamp before Greene's absolutely heart-stopping soprano solo pulls the players into a serenely ecstatic, cresting groove. There's no topping Greene's lines, and no one tries; rather, Cohen's bass solo brings the music back down, and down again, until the piece ends with a whisper.

Greene works more soprano magic on "Feediop, but much of its power—and it is powerful—comes from the fact that Cohen, Barsh and Guilliana have been playing it for years, and they simply murder its mixed-meter, vamp-soaked sections. Special praise must be given to Guilliana—here, and elsewhere, he's the essential anchor to Cohen and Barsh, playing with a distinct, wristy power that's deceptively light and dancing.

Trumpeter Urcola shines on the Latin scorcher "Etude, flawlessly negotiating its hopping, off-kilter clave rhythm, but it's Greene's tenor lines slashing across Barsh and Cohen's tight-locked single-note syncopations that push the piece into territory that's as emotional as it is technical.

The acoustic trio chamber-jazz piece "Elli is performed in a less constricted manner than its studio counterpart on Continuo; it's hardly free, but considerably ventilated. Cohen and Barsh trade lines in a manner that's intimately conversational, and when Guilliana begins to embellish their triplety phrases, you can almost hear the audience sigh.

The CD comes with an accompanying DVD of different performances, and it's as good as the CD. Recommended.