Arturo Sandoval at the Blue Note 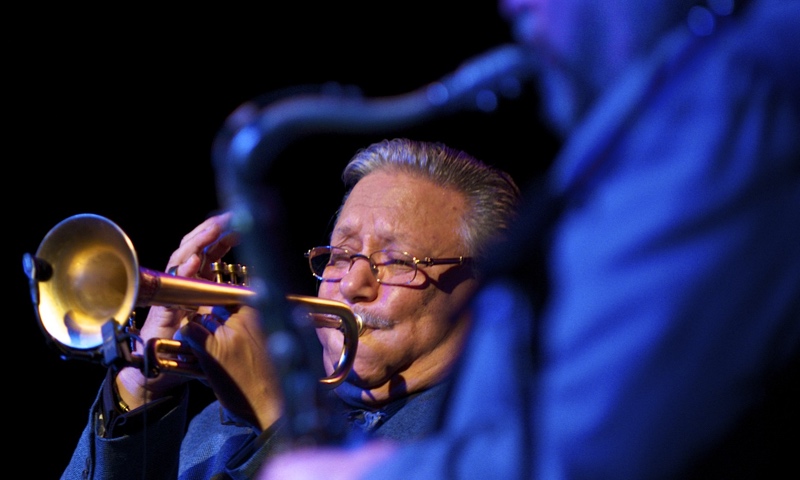 The Halloween Party crowd was out in full regalia in the Village last night, but, the real action was at Arturo Sandoval's first show at the Blue Note. The 10-time Grammy®-winning Maestro was in top form as he and his powerhouse ensemble elevated the SRO—and very admiring—crowd with an evening of hard-driving, red-line-intense Bebop.

Given Dizzy Gillespie's current Centennial and having a mentor-protégé relationship with Diz, it was no surprise that the evening was lathered up with Gillespiana. Sandoval opened his early set with "Con Alma" in a breathy, marvelously soulful rendition. After some audience pleasantries, Sandoval, ever the quintessential showman, dazzled with a marvelous Harmon-muted send-up of "Birk's Works." Some humorous spoken queries about "What is Bebop?" followed in which each of these segments were interspersed with brief, but burning clips of "Hot House," and other Bopera classics. A speed-of- light rendition of Gillespie's "Bebop" followed, as well as Arturo's heartwarming vocalized original, "Dear Diz, Every Day I Think of You," performed over a hushed crowd. "A Night in Tunisia," featuring stratospheric stuff closed the set.

Sandoval demonstrated his musical genius not only with his gorgeous ballad and technical virtuosity, but, also his timbale work, synthesizer and ace piano playing. All were dazzling. He had the audience completely enthralled with his entire presentation from opening note to last. The Sandoval unit is, in a way, a younger, but, purely a mirror image of the Maestro. This is a supremely talented, swinging and hard-driving musical force with which to be reckoned. Drummer Johnny Friday and percussionist, Tiki Pasillas were devastatingly energized and drove a furious bus. Bassist John Belzaguy laid down same and pianist Kamuel Roig and keyboard man Dave Siegel were outstanding contributors. Guest performers Czech saxophonist, Karel Ruzicka and clarinetist, Ye Huang joined in to offer fine ensemble work and solos.

No trick, but, a truly marvelous treat as night of stellar music was had. Diz, Bird and all the Jazzers in "The Great 52nd Street in the Sky," as great radio DJ, Bill McCann calls it, were digging this scene tonight, berets affixed and wishing they were on that Blue Note stage. As a matter of fact, I could swear I saw a goateed Cat smiling ear-to-ear seated on the stairway next to the Maestro's personal assistant (and great trumpeter in his own right) Keith Fiala. No "Boos only Ool- ya-koos at this party.