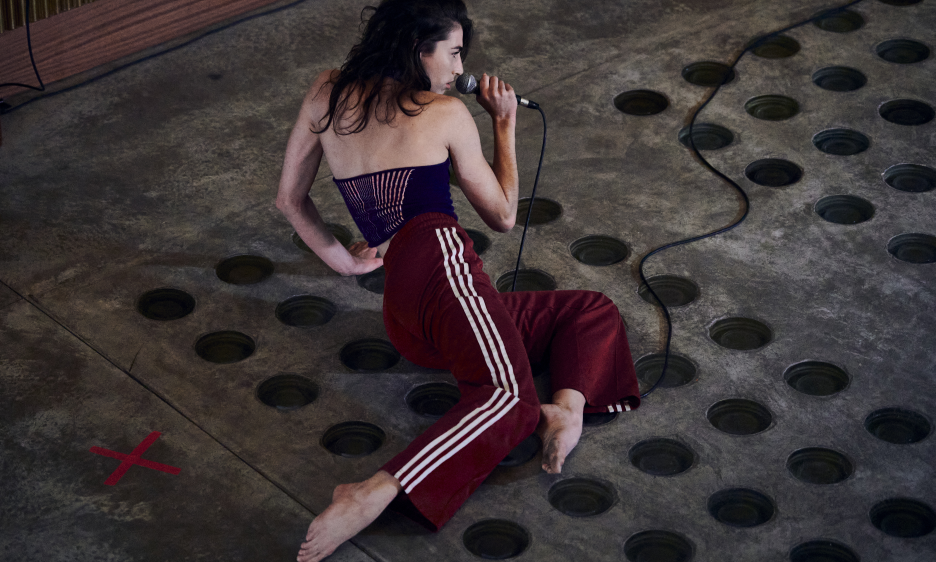 
Artonov is a Belgian festival that's committed to the commingling of creative strategies. Performances will always display at least two artistic forms, picking from a treasure trove that includes music, dance, film, poetry, painting, storytelling, video and even olfactory and culinary creations. Its other key predilection is a love of unusual locations, mostly with a history that stretches back a century or more. If the organisers select a modern building, then it will always possess some unusual architectural or interior design feature. The whole of Brussels is used, often in central locations, but sometimes far out on the city's perimeter.

This eighth edition of Artonov was a nine-day festival, but your scribe was in town for a middle period of four days. His first show happened at Brasserie Surréaliste, a new bar that has already been operating as a basement brewery. A 1932 Art Deco building has sprung back into use, after being dormant for a decade. Its frontal area looks like quite a conventional café space, but the long room where this performance took place has an equally extended bar, and a slim balcony level. Its pissoir is the most unsettling ever experienced by your scribe, the urinals found inside a large mollusc-shaped curving structure that's a distorted chromium mirror, inside and out, hall-of-mirrors-style, stretching its human inhabitants into stick insects or broad toads, depending on which urinary station is chosen. Frightening!

Days later, Brassérie Surrealiste beer products were sighted in other locations across Brussels, so their taste-experience is rapidly spreading. The choreographer Isabella Soupart presented her new Silence work, with music direction from the pianist Guy Vandromme. The long bar was populated by sound-mixing and lighting engineers, facing the majority of the audience, ranged all along the lengthy opposite wall. Right down the central floor, a long table stretched. A piano stood at the room's far end, and the guitar tools of an amplifier and effects pedals were close to the entrance. A dancer stretched and curved in a far-end doorway, readying herself for the show.

The piece was inspired by Yuval Noah Harari's 2018 book, 21 Lessons On The 21st Century, which presumably provided the text that was intoned at certain strategic points, either live, or issuing from a laptop. But there was also a narration concerning the Russian invasion of Ukraine, so more recent input was clearly evident (Soupart has a Polish-Ukrainian background). That lone dancer emerged to offer an exceedingly original sequence of moves, avoiding some of the more clichéd gestures found in some dance companies. It was soon clear that the use of live music was very finely judged, as an interwoven exchange between dancer and instrumentalist, involving action and response, as well as actual acknowledgement of each other's physical presence. Not always the case during dance performances.

Ambient hums and whines set the mood, along the brickwork walls and the massive air conditioning pipes on the ceiling. A techno pumping grew, as the first dancer made clockwork starfish shapes, arms and legs choosing sharp angles, thumbs-and-two-fingers making fleshly guns. It soon became apparent that if Johanna Willig Rosenstein was not the company's official principal dancer, then this is what she unavoidably became, sliding under the twinkling piano, body-brushing the stone floor, with no spaces forbidden in which to gesture and shape-shift. Another dancer leapt to the sound of wandering electric guitar, riffs and acrobatics combining with hip hop floor-language, collapsing and sliding. Rosenstein returned to sing a song, uncoiling a microphone lead and integrating her moves while delivering a powerful vocal tension. Once again, it was highly unusual to find singing and dancing so intimately entwined as this, becoming a multi-faceted expression, as the morose ballad drifted forth. Eventually there were five dancers moving in unison, and percussionist Olivier Taskin shifted the nature of the sonics yet again, using a microphone stand as his instrument. Every few years, an exceptional dance-and-live-music performance comes along, and this was the most compelling since early 2020, in this new after-lockdowns era.

As a complete contrast, the next evening offered a solo performance in front of a small audience. Thomas Bloch gave a glass harmonica recital at Queens Brussels, a neo-classical mansion built in 1876. Bloch is a specialist on this very unusual instrument, which was created in 1761, comprising 37 glass discs, spinning on a central axis, played by the fingertips, which are moistened in small water bowls. Frenchman Bloch had already set the glass in motion before the gig began, powered by makeshift battery, looking like a vintage tombola spinner. Despite its name, we shouldn't have expected anything like the popular hand-held harmonica. In terms of sound, it's a kind of theremin precursor, with a tone not unlike that of the ondes martenot, another specialist instrument that Bloch has mastered. Although he's written a few originals for glass harmonica, much of the short set's repertoire was classical, from the second half of the 1700s, with Mozart being the most famed contributor. A luminous, floating character dominated, simply due to the instrument's innate qualities. Due to the short duration of each tune, and the unfamiliar status of the glass harmonica, the performance took on a demonstration quality, like a workshop. Bloch's fingertips made a spidering glide, sensitively coaxing out the sonics, with a staccato effect also possible, when using a recorded backing track. He occasionally sounded like the ambient Brian Eno, or like a pipe organ, minus the air. Bloch could also stroke out an ice-melting glissando, when required.

Even though the glass harmonica is an ultra-rare instrument, the following night, at the Bozar venue, in the city centre, Nils Frahm was found to include a larger version in his massive removal van contents stage-spread. What were the chances of this? No glass harmonicas for years, and then a pair of them on adjacent nights!

On the third day of your scribe's Artonov phase, the location switched to the fairly central Vanhaerents Art Collection, in its bright white three-floor exhibition space. It looks newly-built inside, but the warehouse dates from 1926. Formed in 1993, Spectra is one of Belgium's chief new music ensembles, its members arranging themselves around the entire upper level, interspersed with the modern sculptures on show. Conductor Filip Rathé governed with subtlety, coaxing sensitive sound out from violin, viola and cellos, flute, clarinet and twinned percussion banks. There was also an electronics element for this programme of John Cage, Karlheinz Stockhausen and the much less-known Dirk Veulemans. The final frontier of space united the works thematically, with "Atlas Eclipticalis," "Cartridge Music," "Tierkreis" and "Voyager I & II" presented as an uninterrupted sequence.

Extreme spatial placing had an effect on individual statements, especially depending on the chosen location of each audience member. Also, the electronics were dispersed around an eight-loudspeaker array, heightening the subjective experience. The paired vibraphones were very trebly, contrasting with the sonorous strings and warm horns, the live electronics providing a susurrus of insectoid detail, gathering mass, with a faint bass presence. There was an underlying hum, and then a motor-groan. Rathé was led by a counting-up digital display, a graphic score prompting sparsely pointillistic events, underneath a canopy of sensitivity. The zeroes appeared, and it was time to seep into another work. A soft drone sustain issued from the strings and horns, percussion quietly chiming, watery electronics burbling, ultimately making a heavy-landing on distorted verges.

Come Saturday, there was an afternoon performance of "Nine Bells," in the Grand Narthex space of the Art & History Museum. The performance took place in this extremely large nexus point between different galleries. Aya Suzuki was ostensibly a percussionist, but also required to be a performance artist, as her differing chime-patterns were governed by a precisely ritualistic score that held a mathematical quality. This was minimal music in its most extreme state. The 'bells' looked more like small hubcaps, suspended on very slender poles, set out in rows. The musical notation was quite simple, with the complexity lying in the artist's given trajectory, constantly criss-crossing between the poles in a purposeful, pre-ordained sequence. Hits could be light or sharp, glancing or deep, according to the delineated patterns. As well as the bells, Suzuki's footsteps were part of the music, initially slapping purposefully, as if in a swimming baths setting. Also, her pauses were significant, silence instead of striking. Later, her footfalls were softer, as Suzuiki moved to the perimeter to regard the audience from a position of stillness. Even specialist minimalism enthusiasts might have been challenged by the sheer lack of content here, as all personal sensitivity, expression and potential for improvisation seemed to be banished. The visual and sonic materials were stretched thinly over around 40 minutes, making the composition a terse exercise. The US composer Tom Johnson's original bells were used, as heard in the 1979 premiere.

Later, in the evening, we moved to the much more inviting City Hall Of Saint-Gilles, with its lighting glow, and its close lines of chairs. Ensemble Ausonia combined sepia-toned European classicism with the mysteries of Japanese noh dance gyration. A trio of musicians played harpsichord, violin and violone, this latter being an old term for several lower-toned instruments. Masato Matsuura appeared periodically from a side-door, always in a new costume, and always intent on a very slow, graceful expression, setting up a tension between gradual development alongside the often surprisingly hectic compositions. Ausonia made their chosen pieces (by Matthias Weckmann, Johann Jakob Froberger, Heinrich Ignaz Franz Biber) their own, imbued with in-the-moment energy and extremely individualist expression, particularly in the case of violinist Mira Glodeanu, with her flighty embellishments during the Biber solo piece. This 'stylus phantasticus' is a little-known Italian-German-Austrian part of early baroque music, involving what appears to be an early use of free-form improvisation. Matsuura clutched funereal flowers, wore a white mask, with long, spiky hair and a lemon gown, operating in the realm of extreme stasis. This performance provided an exceptional climax to your scribe's four-day Artonov experience.