Rock the Casbah of Love

Before the boys get to two releases hot off the presses, they spend some time with a Steve Kuhn release recorded soon after he parted ways with Art Farmer and started dating Monica Zetterlund. Then it's on to a fairly “out" recording by a veteran reed player and a less world-music-than-it-sounds release from a bass clarinetist with a Coltrane fixation. The episode wraps things up with an in-depth look at Paul Anka's transformation of rock standards into mid-sixties ... 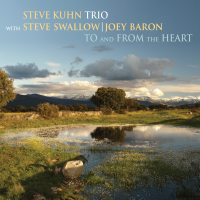 Now an octogenarian, Steve Kuhn's career has in 2018 spanned nearly sixty years, never having a long lull of time without recording new music. It becomes something of a marvel then that after all this time, the pianist still finds something new to say; he is still able to surprise listeners with songs they don't expect and improvisations they don't anticipate. He continues with the same trio he used on his previous release, At This Time... (Sunnyside, 2016) ... 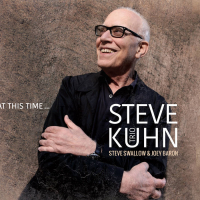 The wonderful and deeply satisfying At This Time... brings together pianist Steve Kuhn leading a trio comprised of electric bassist Steve Swallow and the ubiquitous (and always smiling drummer) Joey Baron. The immediate impulse for the recording was an extended set by this trio at Birdland, in New York City in 2015. Swallow and Kuhn go back forty years to Kuhn's ECM debut, Trance, with Kuhn knowing Baron for more than twenty years. This trio also recorded Kuhn's ...

Steve Kuhn Trio Dazzle Denver, CO April 4, 2016 Against the backdrop of a bombastic presidential election campaign with calls for nuclear proliferation and carpet bombing it's refreshing to hear nuance. The Steve Kuhn Trio understands nuance. And more. But it's the nuance that makes listening to this trio so satisfying. They swing, they play standards, they do all the things a top-flight jazz piano trio should do, but on top of that they display ... 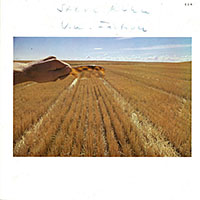 Steve Kuhn Non-FictionECM Records1978 Today's Rediscovery is another title that falls into the category of “begging to be issued on CD for the first time. When ECM Records released Life's Backward Glances--Solo and Quartet in 2009--part of its Old & New Masters Edition series of box sets that gathered together various albums, some never before on CD in their full form, others never on CD before ever--there seemed to be one notable absence from a ... 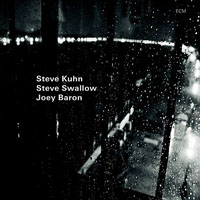 Context, they say, is everything. With nearly 50 albums as a leader in a career that now spans 55 years--and stints with everyone from saxophonist Stan Getz and flugelhornist Art Farmer to trumpeter Kenny Dorham...even a brief stint with saxophonist John Coltrane--pianist Steve Kuhn's best and most varied work has been across the now-ten albums recorded for ECM. You need only look to Life's Backward Glances: Solo and Quartet (ECM, 2008)--the box collecting 1975's solo piano outing, Ecstasy; 1977's Motility, ...

Steve Kuhn's most recent CD, Mostly Coltrane (ECM, 2009), pays tribute to John Coltrane, having been the first pianist in the legendary saxophonist's quartet. He also has played as a sideman with Kenny Dorham, Art Farmer, Stan Getz and many others. Mostly Kuhn has led his own groups, largely trios with bassists including Buster Williams, Eddie Gomez and David Finck and drummers such as Al Foster and Billy Drummond.

Kuhn has a long association with ECM Records, which also ...