Pianist Darrell Grant's debut album Black Art (Criss Cross) was released in 1994, and became acclaimed as one of the definitive statements of New York jazz in the 1990s. It featured bassist Christian McBride, drummer Brian Blade, and the late, great Wallace Roney on trumpet—all of whom would go on to make major statements of their own in the music. In 2019, some twenty five years later, Grant had the opportunity to revisit the album repertoire at Birdland, convening bassist ...

Darrell Grant Black Art @ 25 Quartet Birdland Theater New York January 16, 2019 In the tumultuous, twenty-five year interim since his debut, Black Art took the early to mid-'90s jazz community by storm. Pianist Darrell Grant has built for himself a solid, respected, and steady, if low-profile rep; an unapologetic, gentleman post-bopper whose infectious swing brings a room to its feet. So it's only natural that Grant come to Birdland Theater, in the city ...

Darrell Grant: From The Heart, Through The Keyboard

Pianist Darrell Grant believes in the power of music and art to change people, and through that path effect positive change in the world. That path may be the road less traveled, but he is not alone. After a time of learning his trade and then establishing himself as a musician with something to say he's been striving to move his art down that road over the years.

His newest music, captured on Truth and Reconciliation ... 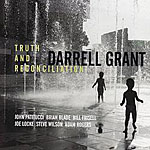 Pianist/composer Darrell Grant's Truth and Reconciliation might be categorized as “music to make the world a better place." A strong case could be made that all music--indeed, all art--has that purpose. Grant's aspirations in that direction here are more on-the-sleeve than you find on most musical endeavors. The results on the project are remarkable for their celebratory beauty and unadorned artistic truth.The core of the music-making is the piano trio of Grant teamed with drummer Brian Blade and ... 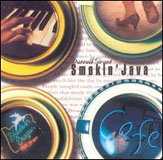 There's a lot going on with pianist Darrell Grant's fourth album as a leader. First it's a live performance in Rochester, NY. It was the Eastman School of Music in that city that awarded Grant a music scholarship at the age of 17, making him a prodigy of sorts. Second, the album is a tribute to his adopted town, Portland, OR. He joins many other jazz artists who have made Northwest U.S. their home. Third, it's Grant's debut as a ...

What do you do in a coffeehouse besides sip cappuccino and nibble on some tasty kind of baked dessert product? Darrell Grant knows. He's written a short story to go along with his fourth album. The story, somewhat autobiographical, tells of a musician who's moved away from the hustle and bustle of the big city to a place where folks slow down once in a while and enjoy each other's company over coffee. Similarly, Grant's modern mainstream album slows things ...