The Quartet Sessions (there are two of them) mark the eighth recording as leader by New York-based tenor saxophonist Chad Lefkowitz-Brown, an heir-apparent to an acclaimed dynasty of hard-boppers whose monarchs include Dexter Gordon, Wardell Gray, Gene Ammons, Charlie Rouse, Hank Mobley, Sonny Rollins and their peers, and embraces such contemporaries as Eric Alexander, Don Menza and Josh Redman, among others. In fact, it's hard to listen to Lefkowitz-Brown (or Chad LB, as he is often called), especially on the ... 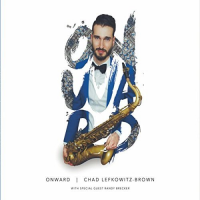 Hot jazz saxophonists sharing the stage and/or recording booth with pop artists: Wayne Shorter collaborating with Joni Mitchell; Donny McCaslin breathing fire with David Bowie; and now, Chad Lefkowitz-Brown touring the world with Taylor Swift. Onward, Lefkowitz-Brown's sophomore CD release as a leader, touches on pop music with a robust reading of Stevie Wonder's “Isn't She Lovely," showing that he, like McCaslin, can torch a pop song melody. But about half of the music of comes from the gold mine ...