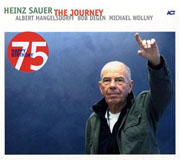 Jazz may be marginalized but, despite that unfortunate reality, it's still nearly impossible to keep up with the multitude of artists deserving attention--even when one of them is German saxophonist Heinz Sauer, a fixture on the German scene for over half a century. ECM fans may know his work on George Adams' Sound Suggestions (1979) and the Jazzensemble des Hessischen Rundfunks collection, Atmospheric Conditions Permitting (1995), on which many of the same players showing up on Sauer's 75th birthday collection, ...

Tenor saxophonist Heinz Sauer, who turns 74 this month, was a mainstay of the extraordinary European free jazz experiment of the 1960s. He played with late-sixties incarnations of the Globe Unity Orchestra, alongside a truly mind-boggling array of heavyweights (Derek Bailey, Han Bennink, Willem Breuker, Evan Parker, Alexander von Schlippenbach); he would enjoy an even longer-standing collaboration with trombonist and fellow Globe Unity alum Albert Mangelsdorff, who died in 2005.Though Sauer's artistic productivity has never flagged, he has ...