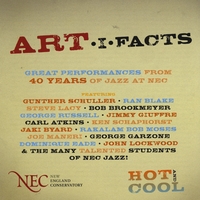 For almost 150 years the New England Conservatory has been a repository of learning for musicians from around the world. The institution has maintained a fine sense of history and 40 years ago began a long and intense love affair with Afro-American music, when it became the first major conservatory in the country with a fully accredited Jazz Studies Program, instituted by then conservatory president, composer and multi-instrumentalist Gunther Schuller. Since then an endless stream of stellar musicians has emerged from its program, carrying the history of the music of America out into the world. This has been as true of its faculty as of its students, too numerous to name. However, it bears mention that bassist Charles Mingus and pianist Jaki Byard taught there, as did the pianist George Russell.

Refreshing partnerships and residencies continue to abound. Saxophonist Wayne Shorter melded his quartet with the NEC Philharmonia for a performance of Prometheus Unbound. The violinist, Carla Kihlstedt, just completed a short residency and the prodigiously talented pianist Jason Moran has joined the faculty of an institution he calls "an open door" for jazz. So it is probably no surprise to find that some of the finest performances of America's music might have happened as a result, or under the auspices, of the NEC.

ART-i-Facts, released to coincide with the so-called 40th Anniversary of the Celebration of Jazz Hot and Cool, is a fine document in praise of both the conservatory and its efforts to hold high the esteem of 20th century American classic music. Recorded performances range from the hauntingly beautiful solo interpretation of Thelonious Monk's "'Round Midnight," by Jaki Byard, as well as another stellar rendition by pianist Ran Blake, to George Russell putting the NEC Big Band through its paces as he directs them through his challenging chart, "All About Rosie," and Gunther Schuller directing the NEC Jazz Orchestra as they negotiate Duke Ellington classic, racy "Cottontail." There are also memorable performances by soprano saxophonist Steve Lacy, playing his solo version of "Thelonious," and a splendidly mysterious performance of John Coltrane "India," by tenor saxophonist George Garzone.

Among the most memorable tracks are the beautiful "Cameo," by valve trombonist Bob Brookmeyer with the NEC Jazz Orchestra, Jimmy Giuffre "The Train And The River," by tenor saxophonist Sam Decker, guitarist Will Graefe and bassist Nate Therrien, and a rousing performance of Bob Moses "Reverence" by the NEC Jazz Orchestra under the direction of Ken Schaphorst. The fabulous and tantalizing traditional Greek chart is given a magnificent twist in "Zeibekiko" as the clarinet of Joe Maneri and the doumbek of Sophia Bilides fuse the 9/8 rhythm with an elastic jazzy improvisation. Vocalist Dominique Eade rendition of her spiritual "Go Gently To The Water" is enthralling as is the magnificent closer, Scott Joplin "Maple Leaf Rag," by the NEC Ragtime Ensemble, conducted by Schuller.

To those who have posited that the NEC has been a tad Euro-centric, here is ample proof that the opposite may be true. Moreover, there is little doubt that any venture that was blessed by Schuller was full of reverence for the music created by the genius of Afro-America—little doubt that this is as much the classical music of this century going forward as any music written by so-called classicists. ART-i-Facts is an album of truly historic music kept alive by succeeding generations of musicians, as much as it is one that might be enjoyed for the sheer joy of this music called jazz.