BY MARK CORROTO
February 22, 2016
Sign in to view read count 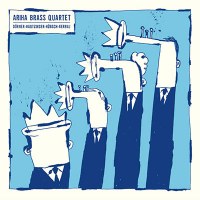 The visual component of music has seemingly always been given short shrift by critics, and for that matter, listeners too. Except for the rare instances where a person is born with an acute synesthesia, or the ability to see musical notes as colors or shapes, perception of sound is limited to emotion and the sensation of movement i.e. dance music. Improvised music, especially minimalist improvisation practiced by the Ariha Brass Quartet maybe the best avenue for a listener to develop their own form of synesthesia.

The practitioners here, three trumpeters, Axel Dörner, Franz Hautzinger, Franz Hautzinger, and Carl Ludwig Hübsch hoisting a tuba, practice a unique approach to their instruments. Dörner's horn has been featured in the modern jazz ensembles of Alexander von Schlippenbach, Ken Vandermark, and Sven Ake Johansson, and the post-bebop revival bands Peeping Tom and Die Enttäuschung. Similarly, Hautzinger's work in the Max Nagl Ensemble and Hübsch in Michiel Braam's Hybrid 10tet may not prepare you for this otherworldly experience. All four musicians set aside a traditional approach to playing, substituting breathe for notes, abandoning a mouthpiece, and applying amplification to microscopic sounds.

The quartet recorded this session in Beirut 2013, after a week's residency and performances. The four like-mind players open the disc with "Mar Mikhael in The Afternoon," the longest improvisation at 16-plus minutes. The fluttering of notes is accompanied by the snorting of unseen wild beasts and the coyote howls of brass. Their language, developed in the past 20 years or so, is a direct descendant from the European (as opposed to the American) systems and improvisers such as Derek Bailey, Eddie Prevost's AMM, and Paul Rutherford.

Stripped of the conventions of noted music, the growls and micro-notes would not be out of place in sci-fi cinema as the backdrop to the silence of an orbiting space station. The squiggles and on/off switches of sounds inhabit the ghosts in the machines of the imagination, but also the rumble and hum of the earth's inner core. "Hamra Drinks" buzzes with the low (really low) bass reverberation and the looping notes of trumpet that take on an organic biologic shape. Each piece conjures a response be it a visual, an emotional, a fragrance, a flavor, or something tactile. Ahira Brass Quartet opens the listening experience to all five senses.