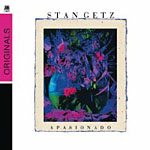 Tenor saxophonist Stan Getz's neo-big band album Apasionado has been consigned to minor league status since its original release in 1990. It does, indeed, look unpromising: recorded in fall 1989, when Getz was undergoing treatment for the cancer which would kill him less than two years later; with a pair of synthesizers replicating a string section; and with the commercially astute but MOR focused Herb Alpert producing.

But 20 years on and rereleased, Apasionado rises way above expectations. Getz is in soaring form, commanding attention so completely that the ersatz strings, and Alpert's slight arrangements, become irrelevant, barely emerging from the distant background where they belong. Apasionado, despite the received wisdom, is actually a very fine Getz album.

The album's structure was modeled, in large part, on Getz's masterpiece Focus (Verve, 1961), on which the saxophonist improvised, with practically no rehearsal and without prewritten melodies, over a suite played by a string orchestra arranged by Eddie Sauter. While Sauter's classically influenced writing on Focus has enough depth to stand up on its own, and Alpert's on Apasionado has a schlocky, fusionesque flavor, both albums present Getz in unrehearsed, stream of consciousness flow, creating the "themes" and their extended improvisations entirely in the moment. On Apasionado, only "Waltz For Stan," synth player and orchestrator Eddie del Barrio's "Coba" and synth player Mike Lang's "Lonely Lady" have pre-composed melodies. A couple of tracks last over eight minutes, the average length is over six, and Getz is on-microphone almost continuously, his longer solos complemented by shorter, more occasional ones from pianist Kenny Barron.

ADVERTISEMENT
The Apasionado sessions, over three consecutive days in September 1989, didn't start well. Finding some errors on his score, Getz roundly cursed del Barrio, who had made the notations. Del Barrio responded in kind and both men stormed out of the studio. Only Alpert's practiced diplomacy saved the day. In summer 1990, Getz toured Apasionado with a smaller band including del Barrio and Barron, and with drummer Terri Lyne Carrington and electric bassist Alex Blake replacing the album's Jeff Porcaro and Jimmy Johnson (see the YouTube clip below). The album's seven-piece horn section was too expensive to take on the road.

Now reissued in Verve's no-frills but excellent Originals series—which put out the sublime five-disc box set Stan Getz: The Bossa Nova Albums in fall 2008—Apasionado is a blast of prime, late period Getz and it deserves to come out of the shadows.