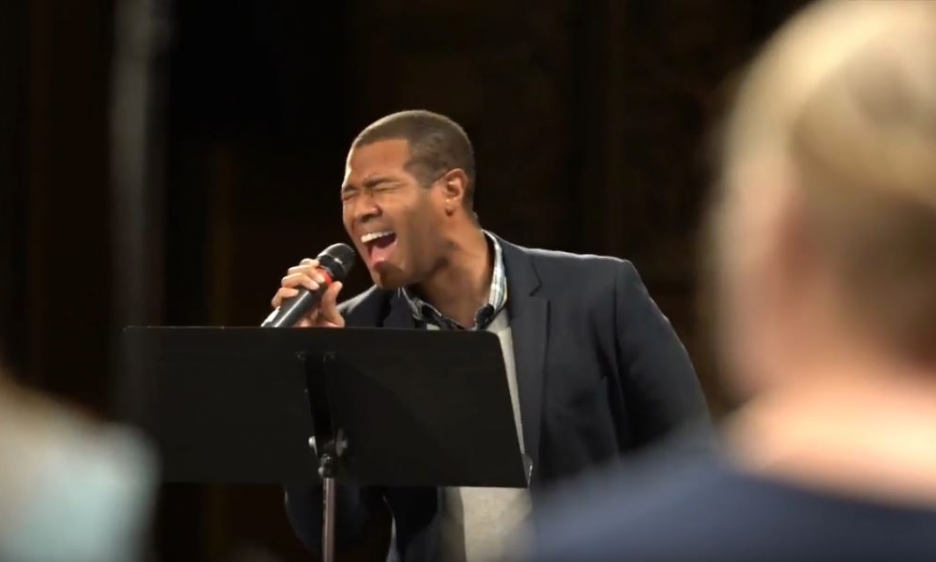 By SUZANNE LORGE
November 25, 2018
Sign in to view read count

My approach to music has to be diverse because I want to connect with as many people as I can in this lifetime. I [always had] an affinity for rhythm and blues, gospel, jazz, and soul...
&#151Anwar Robinson

Anwar Robinson has the kind of voice that could stop traffic—rich, soulful, and reverberant. Beyond his innately spectacular instrument, Anwar is well-schooled in just about all vocal styles—jazz, blues, R&B, pop, musical theater, spirituals. So it's no wonder that in 2004, he moved quickly into the winners' circle on the fourth season of American Idol, one of the most popular shows in television history. What's surprising is his return to community-based service after reaching such a personal and professional peak. Today, Anwar acts as the Artistic Music Director at the United Palace, a stunning, early 20th century performance space in Washington Heights, arguably one of the most diverse neighborhoods in Manhattan. Recently, All About Jazz spoke with Anwar to discuss how music continues to lead him to take on new challenges. And yup—that voice still stops folks in their tracks.

All About Jazz: What has happened in your career since American Idol?

Anwar Robinson:: I did the American Idol tour in 2005, which was amazing. My goal [when auditioning for Idol] had been to make the top ten so that I could do the tour and the album, and I accomplished that. There were 100,000+ hopefuls that year, so I didn't think I would. On that tour I was sharing the stage with so many great artists—Carrie Underwood, Bo Bice, Constantine Maroulis, Vonzell Solomon—all of them friends.

AAJ: You also did a star turn in some musical theater tours.

AR: Yes—first I did Rent in 2007. I got a call to come in and audition for the role of Tom and I did that, internationally and nationally. Also an amazing experience. After Rent I did Godspell at Syracuse Stage and got my Actors Equity card. I'll always be grateful to Syracuse Stage for the opportunity to play Jesus in that production.

AAJ: At some point you gave up touring, though. What was behind the shift?

AR: I got to tour in two different kinds of settings. The American Idol tour was a rock star tour, and the Rent tour was a bus and truck tour. I had a great time on both of them, but I wanted to be home and stable. So I went back to teaching to reconnect with my foundation and my purpose, with why I started doing all this. It was because of great teachers, particularly music teachers. Fast forward, all of my experience on those world stages is clearly relevant here at United Palace.

AAJ: One of the reasons you did so well on Idol is because of your diversity as a musician. What's behind your interest in so many different types of music?

AR: My approach to music has to be diverse because I want to connect with as many people as I can in this lifetime. I [always had] an affinity for rhythm and blues, gospel, jazz, and soul, and I worked in those genres under some of the greatest producers. [Anwar was signed with Clive Davis.] But I also love musical theater and classical music. Music is the universal language, so I have to speak the language in its many forms. This understanding has bled over into developing other skills as an administrator. I was a school administrator for four years, then director of creative arts at an independent school in Manhattan, and now I'm an administrator here at the United Palace. Taking care of people is very important, so to be an effective artist you have to hone those social and business skills as well. We have to find creative ways to connect with people.

AAJ: In your work at United Palace, you play to wide-ranging audiences. Tell us how you address that diversity in your programming.

AR: Well, this fall we're doing a gospel jazz version of [Handel's] Messiah with the Fort Washington Chamber Orchestra under the musical direction of [conductor] Chris Whittaker. This is a chance for the community to come together and do a classic work of music in a language that's a bit more modern. I'm so excited because in addition to being a featured [tenor] soloist in this performance, I get to work behind the scenes and put it together. This is a big, big project and we haven't done anything of this magnitude at United Palace before.

AAJ: You also have some other terrific soloists in this production.

AR: Yes, we're going to feature [Detroit native] Angela Birchett from the recent tour of The Color Purple and a young up-and-coming [singer/songwriter] named Yancy Garcia, whom I had the pleasure of teaching at Harlem School of the Arts. I've pushed to create a platform for this young artist—that's the kind of work we're doing at United Palace. Building a platform so that we can give opportunities to people in our community.

AAJ: What other big performances are coming to United Palace?

AR: [This month] we'll be celebrating the 40th anniversary of The Wiz with Shanice Williams [Dorothy in the 2015 NBC production of The Wiz Live] coming to perform. Then, in February next year we're participating in The Road to 2020 with Unity Earth, an organization that uses

AAJ: Along these lines, United Palace isn't just one of the most beautiful performance spaces in Manhattan, it's also the site of a strong music ministry. What is your relationship with that side of the United Palace organization?

AR: I am definitely on the track to ministry. As a result of my service at the United Palace, I am now a first-year seminary student at the One Spirit Interfaith Seminary. I'm in the class of 2020, and when I graduate I'll become an ordained minister. That development came about within the past several months. I really see this as an opportunity to be a community-based leader—not just a faith leader, but to open up the United Palace further, to reach different people where they are in the community, with the arts as the main vehicle. We call it spiritual arts around here, but not everyone is spirit-led and not everyone is faith-based. So my dream is to see United Palace grow into a place that offers what people need as a community organization. We're walking that path.

About the United Palace Located in Washington Heights, the United Palace opened in 1930 as one of five Loew's "Wonder Theatres" across the boroughs and New Jersey. Designed by noted architect Thomas Lamb (Cort Theatre, the former Ziegfeld Theatre) with interiors overseen by decorative specialist Harold Rambusch (Waldorf Astoria, Radio City Music Hall), it was one of the region's premier vaudeville and movie houses. Since 1969, the United Palace has been an inclusive spiritual center celebrating the world's great wisdom traditions. Designated as a landmarked building in 2016, the United Palace honors the building's legacy through major concerts, multimedia productions, movie screenings, and spiritual programming. With nearly 3,400 seats, the United Palace is Manhattan's fourth largest theater.