BY DOUG COLLETTE
November 24, 2018
Sign in to view read count 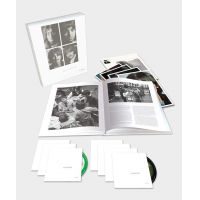 In keeping with its source, The White Album (Apple, 1968), as a virtual primer of contemporary musical style ranging from the The Beach Boys ("Back in the USSR") to Stockhausen ("Revolution #9"), The Beatles 50th Anniversary Super Deluxe Edition is a weighty proposition indeed. In fact, it's alternately daunting and imposing in mere physical form: housed in a hardcover book measuring roughly 10'' x 12.5,'' when out of its clear slipcase (imprinted with the image of those four famous portraits), the package stuns with its plain white cover (and matching inside color scheme ), embossed as it is with the group's name and imprinted with a serial number on the front.

And not surprisingly, even for those not comparably moved when encountering this title upon its original release a half-decade ago, the reaction is similar delving into its contents. Along with Abbey Road (Apple, 1969)(next in line for archiving?), this is one of (if not the) most beloved of all Beatles albums, so to revisit it is a pleasure in itself, all the more so for the way the producers and contributors have been meticulous in placing the work in its proper perspective, within the history of the group and the tumultuous era during which it was released.

As had become the custom by the time of its release in 1968, the Beatles reflected the temper of the times (perhaps no less so now?), a point well taken today given the audio clarity of the various musical components contained on the six CD's and a Blu-ray ( (containing a high resolution PCM stereo, the Master Audio 5.1 album mix, HD 5.1 album mix and direct transfer of the album's original mono mix). As overseen by Giles Martin, the son of the Beatles' original producer, George Martin, in collaboration with engineer Sam Okell, the remix of the original thirty tracks adds both breadth and depth to the sound, so much so it is markedly superior to the vaunted 2009 issue. The fluttering of horns on "Revolution 1" and the crisp separation of guitars on "Helter Skelter" are just two instances of the nuances regularly revealed in hearing these cuts, while the audiophile contents, for all intents and purposes, regardless of your perception of the music itself, present multiple facets of this jewel of a record.

The content on the two CDs of studio outtakes sparkles likewise, this despite the fact that, according to the younger Martin, the Beatles were not consumed with loyalty to high fidelity during the four and a half months of sessions. Rather, the foursome was intent on reaffirming their bond as a band. So it stands to reason that the most engrossing numbers here are those instrumental tracks, sans singing, like "Piggies." Meanwhile, an early version of "Yer Blues," with a ghostly guide vocal, is not only haunting on its own terms, but further demonstration of the unmistakable instrumental unity the Beatles had retained.

That said, as noted within the voluminous liner notes, including a "Track-by-Track" breakdown composed by Kevin Howlett, the four musicians played together on only about half the finished recordings. However, Lennon, McCartney, Harrison and Starr were all present at Harrison's home in early May of 1968 to present their new compositions to each other and their camaraderie is as palpable as the presence in the recordings: it's as if the laughing, talking, singing and playing is taking place in the room during the procession of these twenty-seven selections, only seven of which were previously released on The Beatles Anthology (Apple, 1996).

The boys' inviting presence vividly exhibits the increasingly distinct personalities emerging from the four men. Ironically, it also reveals how much of this material might well have engendered their long-time studio mentor's purportedly staunch opinion a single album would be preferable to a double. The self-consciously clever ("The Continuing Story Of Bungalow Bill," "Happiness Is A Warm Gun"), so often coexists with pure exercises in style ("Martha My Dear" and "Piggies"), that he might well have discerned that (many) more tunes than just Ringo's pedestrian "Don't Pass Me By" do not ascend to the high standards the Beatles set in most of their previous releases.

"Glass Onion" certainly does though, especially as it's decorated with an expert orchestral arrangement courtesy George Martin. Lennon's "Dear Prudence" is as deeply-felt a tune as "Julia" and "I'm So Tired," while this same author clearly demonstrates his fondness for wordplay on "Cry Baby Cry." "Long Long Long" might better stand as a direct declaration of George's spiritualism than the somewhat ponderous "While My Guitar Gently Weeps," but there's no dismissing this track with guest Eric Clapton's piercing guitar solo. Deliciously simple as they are, neither of Paul's acoustic-based numbers, "Blackbird" or "I Will," approaches the structural and emotional complexity of "Hey Jude"—released as a single weeks before the long-player backed the raucous take of "Revolution"—but these tunes of McCartney's add to the pacing of the sequence of cuts, besides sounding less contrived than the hard rock "Birthday."

But this 50th Anniversary Super Deluxe Edition overflows not just with its wealth of music, but also with its treasure trove of information and insight as well as graphics. A complementary array of essays is equally illuminating and thought-provoking, largely because none of its authors overstates his point(s). Giles Martin writes like the well-educated fan who doesn't need to belabor his passion, while Kevin Howlett engineered a masterstroke in his aforementioned 'Track By Track' through his specific references to the individual sessions' cuts.

This frequent contributor to previous Beatles reissues such as Let It Be...Naked (Apple, 2003) very deftly avoids hyperbole in his three pieces as does John Harris as he retrieves his personal recollections of this monumental work and places them in the context of the Beatles' career (the death of Brian Epstein, the release of the animated film Yellow Submarine) and the turbulent sociopolitical climate of the times in which the album first came out (Vietnam, Chicago, Czechoslovakia and France).

The pages devoted to the quartet's final photo session subtly points up the absence of any of those shots, except as inserted into the enclosed poster, included here along with the individual portraits so tellingly representative of the band's dynamic at the time (a sweeping assortment of candid photos, taken inside and out of the studio, fully compensates on that front). And while Andrew Wilson might at first appear to be making too much of the title's cover art phenomenon over the years, as juxtaposed with replications of studio artifacts such as Abbey Road Studios' tape boxes, along with memorabilia and handwritten notes and drawings, his piece is wholly representative of the ongoing fascination with The Beatles as well as its iconic creators of the very same name.