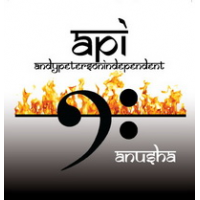 A veteran of Malaysia's pop, jazz, and fusion circles, slap bassist Andy Peterson's first solo album draws from long years of experience and the diverse musical sources that have colored his playing. Peterson started out with the Falcons, a Malaysian pop band, in 1976, paying his dues as the band toured extensively throughout Europe. However, it was perhaps with Asiabeat—Malaysia's premier jazz/world fusion band—that Peterson gained a reputation as one of the country's leading bassists. Invitations to international jazz festivals introduced this self-taught virtuoso to a wider audience, and his phenomenal technique has made Peterson the first-call bassist for musicians visiting Malaysia.

Peterson has provided his deep groove and fine chops for high-caliber artists such as drummer Billy Cobham, guitarist ODonel Levy, flautist John Kaizan Neptune, singers Randy Crawford and Robert Palmer, and Korean jazz sensation Youn Sun Nah, to name but a few. So perhaps a solo album was overdue. The cultural melting pot that is Malaysia has also influenced Peterson to a large degree, and the rhythms and sounds of India infuse the music on these six tracks just as much as jazz-fusion. Whatever the influences, the playing has plenty of fire.

Saxophonist Greg Lyons' spiraling soprano run, shadowed by Peterson's thundering bass, Udapa's ghatam and Kiran's khanjira provide a powerful intro to "Nasty Rusty." Kumaresh's violin cuts through the heady percussion with a weaving run, which varies nicely in tempo. Edvard Lee's keyboard solo rushes in with breathless momentum reminiscent of fusion's 70s heyday, and M D Palavi's beautifully light vocal floats above everything. A thrilling unison section between bass, sax, violin, and percussion follows, which would give John McLaughlin's Shakti a run for its money. It's a mighty impressive opener.

The keen melodic vein in Peterson's playing presents itself on "Tribute," which steers a course between the two poles of fast-paced fusion—driven by John T's drums—and languid, lyrical passages. Indian percussion and violin are ever-present, though they play more of a supporting role than on the incendiary opener. Aubrey's boppish piano solo leads into a crying violin passage, before the band returns to the head and Peterson's delightful melody. Violin and bass combine in unison as the drums tear free, building to a sudden climax. "Tea" is an absorbing mixture of churning, funk-flavored fusion and konnakol, featuring a fine, accordion-toned keyboard solo from Justin Lim.

Pallavi's ethereal vocals illuminate the classical Indian opening to the melodic "Dreams and Reality," a slower, Weather Report-influenced number which shows Peterson's fine fretless playing in its most lyrical light. Eddie Wen's muted trumpet brings additional color to "Spike," a powerful composition that balances driving percussion and konnakol with shimmering keys and a dreamy melody. Peterson switches tempo effortlessly again on the title track, a busy number featuring two violins and which is both celebratory in tone and a rousing set closer.

Anusha is a truly fine debut recording which boldly states the case for Peterson as a top-notch bassist and, more significantly, presents to the world a composer of breadth and imagination. Recommended.