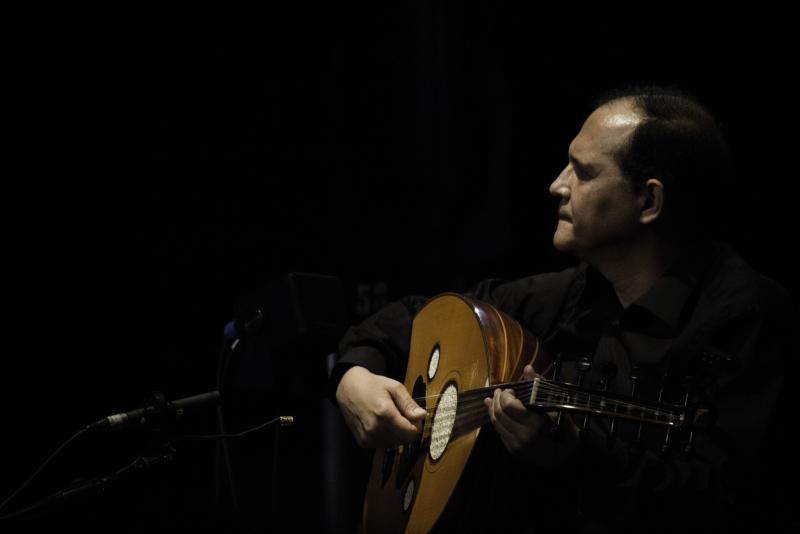 Tunisian oudist/ composer Anouar Brahem is widely acclaimed as a pioneer of the fusion between Middle Eastern music and jazz, with a career spanning over thirty years. In the beginning of the nineties he contributed to the oud celebration spreading in the western world through a music that brought together evasive poetry with elegant arrangements. Well-versed in classical Arabic tenets, his solos could marry jazz theory unique to his vision. Hardly invited in neighboring African countries, Brahem was scheduled for the third day of the Jazzablanca Festival, explaining, during a press conference, his longing for Morocco and the ease to play in a country where he feels at home. Featuring bass clarinetist Klaus Gesing, electric bassist Björn Meyer and percussionist Khaled Yassine, Brahem chose to perform tracks solely from the album The Astounding Eyes of Rita (ECM, 2009), on which this group of musicians played.

Brahem's choice derived from a tradition to focus on one album during live performances. The way Brahem approaches an album's live performance is the way a writer recounts a story. No pauses for comments, no announcements, no explanations, Brahem played his music as a whole compact, unified set. He opened with "The Lover of Beirut," Meyer plucking dramatically for a smooth introduction before Gesing blew soft air to command silence from the audience. Brahem accompanied, humming along with his oud before taking the reins for a long dramatic solo that made his instrument roar for minutes on end, until Yassine contributed some derbouka to make every note from the oud stands out from the whole. Yassine's derbouka playing amplified every note on the oud, and often slowed the rhythm to pave the ground for Brahem to solo.

Meyer again plucked at the strings of his electric bass to introduce the second song, "Dance With the Waves," with Gesing soon following with his own enamoring solos. Brahem looked for the right time to release sharp and focused solos, which Yassine followed to achieve more texture. Brahem's long solos enchanted an audience that followed the tripping rhythms to the very end.

The same sensation was felt in "Stopover at Djibouti," where the tripping frenzy was further enhanced by even faster solos from Brahem and more rhythmic work from Meyer. The refrain, however, was a stopover of elation and recalled the structured part of the song. Brahem had that ability to stray away from the form in his improvisations, yet in a matter of seconds re-contextualized everything back to its initial structure.

Next was the most awaited song of the show, "The Astounding Eyes of Rita." Mainly dedicated to the memory of the late Palestinian poet Mahmoud Darwich—as was the whole album—the song was a peaceful reconciliation between poetic lyricism and bass rhythms. Brahem's melancholic notes sounded slower at times...and deeper. They lingered in space and filled the room until Gesing blew a siren sound that turned bit by bit into a bebop performance.

"Waking state" was hypnotic in nature, starting with bird-like sounds on bass reminiscent of Pink Floyd's sonic experimentation. Then Brahem followed, resonating in the emptiness of the hall like a suspended chord. Yassine entered smoothly for more texture. soloing alongside Brahem, as the song came to an end with the same experimental bass sounds.

The closing "For No Apparent Reason" had an apparent motive, which was to end the concert on a happy note. The high-spirited tune was elusively followed by Gesing, blowing on clarinet, while Meyer's bass resonated in a Latin fashion. Brahem pierced the melody with long fast solos that drew wild applause from the audience.

A standing ovation brought the quartet back for a short improvisation over a familiar tune.