Home » Jazz Articles » Commander Cody and the Lost Planet Airmen: We Got a Live one Here!

Commander Cody and the Lost Planet Airmen: We Got a Live one Here! 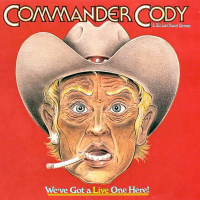 Pimply, hormonal, lower-middle class teenaged boys growing up in the 1960s and '70s were easy marks for fun, subversive, and slightly dangerous music. However, the music being consumed was mostly a generation or two beyond its origin. For Example, "Spoonful" on Cream's 1966 debut recording Fresh Cream (Atco) was an ear-opening introduction to extended performance that would come de rigueur by the 1970s. On Fresh Cream the composition is credited to Willie Dixon who commandeered the song in 1960 for Howlin' Wolf to record for it for Chess Records. Commandeered, because Dixon lifted this song from Charlie Patton's 1929 Paramount recording "A Spoonful of Blues." Patton, in turn, conjured his version from Papa Charlie Jackson's 1925 recording "All I Want is a Spoonful" and Luke Jordan's 1927 "Cocaine Blues." What the British Invasion did was introduce white teenagers to music that had been present all the time, updating it and feeding it back to America's youth by the "spoonful."

The vast majority of the music that became popular in the 1970s was just so derivative. Commander Cody and the Lost Planet Airmen were no exception. The music they played was plainly Western Swing—a musically alchemic concoction made up of equal parts country, western, blues, big band jazz, whiskey and reefer. Asleep at the Wheel and Dan Hicks and the Hot Licks also partook of the Pierian spring of Bob Wills and the Texas Playboys. When Texas Swing and R&B got together, rock and roll was born. Like many other "American Roots" musics, Western Swing enjoyed a renewed interest in the 1970s and there were no better providers than Commander Cody and his Lost Planet Airmen.

Commander Cody and His Lost Planet Airmen was founded in 1967 by George Frayne (AKA Commander Cody), Billy C. Farlow, John Tichy, Bill Kirchen Andy Stein, Bruce Barlow, Lance Dickerson, and Bobby Black. The name Andy Stein should jump out at anyone familiar with Garrison Keillor's A Prairie Home Companion and his house Guy's All-star Shoe Band with Rich Dworsky. What a long, strange trip, indeed. The original band recorded six recordings, including the nearly included in my best live recordings list, Live From Deep In The Heart of Texas (Paramount, 1974) before making We Got a Live one Here! . After this time, the original band began to splinter, but not before committing these live performances to magnetic tape.

The music heard here is rock and roll, country, blues, and folk as filtered through prism of western swing. "San Antonio Rose," "Milk Cow Blues," "My Window Faces the South," and are from the songbook of Bob Wills and the Texas Playboys and "Smoke! Smoke! Smoke! (That Cigarette)" courtesy of Tex Williams and Merle Travis. Carl Perkins contributed "Don't Let Go" and "It Should Have Been Me" came from Ray Charles by way of Memphis Curtis. Clifton Chenier's "Big Mamou" give a Cajun flavor to the set with revolves around the pedal-steel guitar of Bobby Black and the expert harmonica and song writing of Norton Buffalo; not to mention that old piano pounder, the good Commander.

This music smells like filterless cigarettes and beer and diethyl ether as the motor speedway. It is music with a smile, a tongue-in-cheek and a pinch of salt thrown over the shoulder. My window faces the south and I'm almost halfway to heaven...

One of Those Nights; Semi-Truck; Smoke! Smoke! Smoke! (That Cigarette); Big Mamou; San Antonio Rose; Eighteen Wheels; Mama Hated Diesels; Looking at the World Through a Windshield; My Window Faces the South; Milk Cow Blues; It Should Have Been Me; Back to Tennessee; Seeds and Stems Again Blues; Rock That Boogie; Riot in Cell Block #9; Don't Let Go; Too Much Fun; Hot Rod Lincoln; Lost in the Ozone.

Title: We Got a Live one Here! | Year Released: 2015 | Record Label: Columbia Records

About The Commander (a/k/a George Frayne)