Home » Jazz Articles » The Man From Ravcon: Another World

The Man From Ravcon: Another World

By Glenn Astarita
September 6, 2018
Sign in to view read count 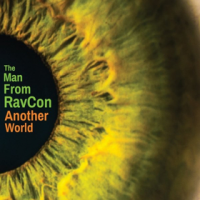 The Man From RavCon, aka Mike Brown, fuses new and old ambient-electronic techniques, phrasings and textures with tight rock grooves amid his gifts as a supreme melody-maker. Based in Charlotte, NC., he was a member of a power-pop unit known as The Ravelers. Brown is a multi-instrumentalist who unleashes his third solo venture with an enticing mix of works that straddle various rock and electronics-centric offshoots with radio-friendly tunes, accentuating his insightful composing skills.

Brown's catchy hooks and burgeoning chord choruses largely ride above straight-four backbeats, including movements that sound like rock anthems via toe-tapping pulses and ascending overtures. But the artist's use of mellotron adds a sense of antiquity into the backend of these up-tempo comps. As a keyboardist, Brown is a textural artiste and generates expansive platforms by integrating layers of colorful synth noises, swarming organ passages and grooving piano clusters.

"Max the Cat" is a contemporary jazz rock piece, featuring guest musician Jeff Eacho's dreamy flute passages atop a medium-tempo rock motif, equating to a good-timey vibe, shaded with the leader's sizzling organ lines. Although "A Peaceful Transition" is designed, in part, with vintage Brian Eno style ambient-electronic vistas framed on a tranquil theme. And "Pole to Pole" is built with Brown's oscillating synth patterns atop another pulsating backbeat and glaring lead guitar riffs.

Brown doesn't reinvent paths previously taken. It's largely about his persuasive compositions, teeming with memorably melodic tonal attributes, and serious-minded technical expositions. In theory, this album should appeal to a wide-ranging audience, who dig the solos, snappy cadences and harmonious song-forms.